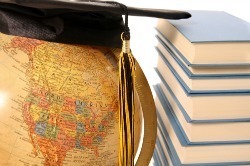 The number of American students studying abroad has more than tripled in the last two decades, but according to Inside Higher Ed, the Institute of International Education aims to double that share by 2020. Over 150 U.S. colleges have already signed on, with many more expected to follow.

The new IIE initiative, called Generation Study Abroad, hopes to increase the number of U.S. study abroad students from 295,000 to 600,000 by the end of the decade, The Huffington Post stated. Currently, just under 10 percent of students study abroad at some point during their college education, and though that share has increased quickly over the last 20 years, Inside Higher Ed reported that year-over-year growth has recently been a more modest 1 to 4 percent. The IIE aims to ramp up this growth by leveraging partnerships with universities, governments and other organizations.

"We believe that being part of a larger initiative like this will really provide the networks and resources to support efforts of campuses to increase study abroad," Daniel Obst, IEE deputy vice president for international partnerships, told Inside Higher Ed. "We know this will take major change and we hope that the Generation Study Abroad initiative will inspire and motivate not just the educators, but also the funders, employers and families so that together we can make it possible for many more students to study abroad."

In a column she penned for The Huffington Post, international career expert and author Stacie Nevadomski Berdan called IIE's goal "a tall order," even for an organization considered to be "the leader in international student exchange." Obst conceded as much but still maintained that the goal is indeed attainable, and if the dozens of partnerships already established are any indication, so do IIE's supporters. In addition to university partnerships, at least eight foreign governments and national exchange agencies have pledged their support.

Inside Higher Ed reported that a number of factors have traditionally limited study abroad participation, namely cost, curriculum and culture. Obst told the publication that the colleges who have joined the initiative already have plans for increasing fundraising for scholarships that would make overseas study more manageable. Berdan noted in The Huffington Post that in order to address curricular difficulties, schools would need to more readily accept credits from programs not directly associated with the university. As for changing the culture of study abroad, Berdan suggested that may be trickier: nonwhite and male students have traditionally been underrepresented in study abroad programs. The IIE intends to change that.

"IIE wants to ensure that every student -- no matter his or her race or ethnicity, socioeconomic background, gender or academic major -- has the opportunity to study abroad," Obst said. "We know we face difficult challenges, but we will work with our commitment partners to develop innovative ways to do so and then share these best practices across the board."