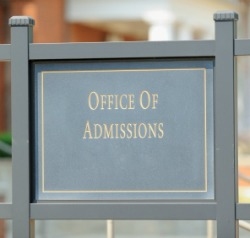 For years, George Washington University has called its admissions policy "need-blind", meaning that applicants' financial status were not factored into the school's admissions decisions. The GW Hatchet, an independent student newspaper, reported, however, that the university has been misrepresenting its policy.

Last week, the university publicly admitted that it puts applicants on its waitlist each year because they lack the funds to cover the school's tuition. As The GW Hatchet reported, admissions representatives as well as the school's website stated that applicants are evaluated on merits only, and that financial need is not a factor. The website was changed after an interview on Friday with Laurie Koehler, recently hired associate provost for enrollment management, revealed that the university has been in fact "need-aware" all this time.

According to The Chronicle of Higher Education, Jeremy Diamond, assistant news editor at The GW Hatchet who conducted the interview with Koehler, first thought that the university had changed its policy without announcing the update. Officials, however, told Diamond that the policy had remained the same for years. As Inside Higher Ed reported, what the university has been doing to date is as follows: a first read review is conducted without any regard to an applicant's financial need. The university then looks at its financial aid budget and determines which students it can admit. Once aid money is gone, students are admitted, waitlisted or denied based on their ability to pay for tuition. The GW Hatchet pointed out that this process affects up to 10 percent of the university's 22,000 applicants each year. Furthermore, it turns hundreds of students who would have been accepted into rejections -- in 2012, less than 1 percent of waitlisted students were admitted.

The Chronicle of Higher Education noted that colleges themselves could decide if and how to broadcast that they consider financial need. Inside Higher Ed pointed out, however, that by stating that it is need-blind when it is actually need-aware, George Washington University violated the Statement of Principles of Good Practice of the National Association for College Admission Counseling (NACAC), which is a code of ethics that states that colleges should "state the specific relationship among admission and financial aid practices and policies." The code also states that colleges are "responsible for ensuring the accurate representation and promotion of their institutions in recruitment materials, presentations and scholarship materials."

The GW Hatchet noted that many experts have criticized the university for misrepresenting its policy.

"It's misleading," said Richard Vedder, director of the Center for College Affordability and Productivity, in The GW Hatchet. "Need-blind would mean, 'We don't pay a bit of attention to financial considerations in making admissions decisions,' and GW clearly does."

On Monday, however, Koehler defended the school's policies in a written statement: "The university's admissions practices have not changed with regard to how financial aid requests are factored in… What we are trying to do is increase transparency of the admissions process. I believe using the phrase 'need aware' better represents the totality of our practices than the phrase 'need blind.' It is important to note that consideration of need occurs at the very end of the admissions process." Koehler's statement went on to explain that being need-aware allows the school to offer better aid packages to students in need.

As The Chronicle of Higher Education reported, this is not the first time George Washington University has made headlines. Last November, the university admitted it had continually reported inflated data on incoming students' class ranking. Shortly after, the dean of admissions retired.

"[George Washington's new leadership in admissions] is trying to get the shop in order," she said in Inside Higher Ed.