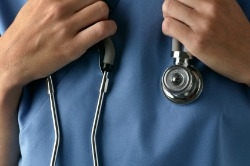 The health care sector could be a good field to enter in upcoming years if a study released Thursday by Georgetown University's Center on Education and Workforce is any indication.

That report, entitled "Healthcare," shows that a growing demand in the sector could lead to the creation of 5.6 million new jobs over the next eight years, the Los Angeles Times reports. In fact, a press release indicates that jobs in the healthcare industry are expected to grow from 15.6 million in 2010 to 19.8 in 2020.

Most of the new jobs are expected to be high-paying, but the problem is that those who are unemployed will likely not have the education required to obtain them. In fact, some 82 percent (or 4.6 million of the estimated 5.6 million new jobs) are expected to require some sort of higher education training. The secondary support jobs require minimal education.

"In healthcare, there are really two labor markets: professional and support," said Anthony P. Carnevale, the Center on Education and Workforce's director and lead author on the report, in the press release.

This growing need for advanced education is pushing out "disadvantaged" minorities, according to Georgetown. More white nurses under the age of 40 held bachelor's degrees than did Hispanics and African-American nurses of the same age group. According to Inside Higher Ed, 24 percent of all health care jobs will require a bachelor's degree by 2020 (up from 21 percent in 2010), while 28 percent of all healthcare positions will require a graduate degree.

But why the growing need in the healthcare sector? According to the Los Angeles Times, it's because the industry is significant in size in the U.S., making up 18 percent of the total economy. Furthermore, as the press release notes, by 2020, one in every 5 dollars earned is expected to be spent on healthcare. This large market size may also be part of the reason that the sector has the highest percentage -- 22 percent -- of employees who are foreign-born. This compares to 13 percent for all workers nationwide. Many nurses working in healthcare come from countries such as China, India, and the Philippines.

"With or Without Obamacare, the United States Will Need 5.6 Million More Healthcare Workers by 2020, Georgetown University Study Says," georgetown.edu, June 21, 2012