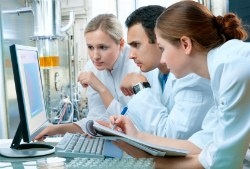 Jobs in science, technology, engineering and math are among the United States' fastest growing and highest paid, a new report from the Georgetown University Center on Education and the Workforce indicated.

In terms of employment growth in the marketplace, STEM will grow to just five percent of all jobs by 2018, but the demand for STEM skills, knowledge and abilities is expanding even faster to include nontraditional occupations such as business services, health care management, manufacturing, mining, sales, utilities, transportation, and other management.

The scientific and technological disciplines have "become the common currency in the labor market," Anthony P. Carnevale, the Center's director and lead author of the report, told The New York Times.

That demand, however, isn't being met.

"If you look at a point in time, we are producing enough [STEM graduates] for STEM occupations," Carnevale said to Inside Higher Ed. "But a more dynamic analysis shows... a deeper problem. The rest of the economy is now demanding and paying for and diverting these kinds of skills."

What's happening is STEM graduates are pursuing non-STEM occupations. As noted in the press release, out of every 100 students with a bachelor's degree, 19 graduate with a STEM degree, but fewer than half of them still work in STEM jobs 10 years after graduating.

They're leaving STEM for even higher-paying positions and for social and entrepreneurial interests. For instance, many take jobs in health, marketing and sales.

"STEM provides choice for people both immediately after school and at mid-career, allowing people to transition to different and, oftentimes, more lucrative career pathways, including management and healthcare that provide long-term stability and excellent wages," Carnevale said in the press release.

With a shortage of STEM-trained individuals, many U.S. technology and scientific companies must recruit from overseas, The New York Times reported.

While a liberal arts education widely was thought to prepare graduates for a wide range of careers, STEM degrees now are increasingly crucial to a wide-ranging career, Carnevale told The Chronicle of Higher Education.

"The technical foundation is worth even more than we thought," he said.