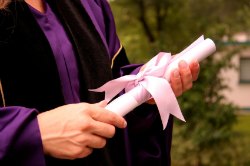 Media reports and the blogosphere have been inundated with speculation that in today's economy, a college degree may be a waste of resources. Not so, decrees a new study, which outlines the statistical college advantage both during and after the recession.

A new study published by Georgetown University's Center on Education and the Workforce makes the statistical case for higher education at a time when recession-linked job loss has caused many experts and politicians to question whether a college degree is still a worthwhile investment.

According to the study, entitled "The College Advantage: Weathering the Economic Storm," college graduates have been impacted by the recession, but not nearly as severely as those without higher education: Unemployment rates for four-year college graduates never exceeded 6.3 percent while the peak for those with just a high school diploma was 13.4 percent. The report notes that even as of May 2012, four-year college grads faced 4.5 percent unemployment versus 9.4 percent for high school graduates.

"It is a tough job market for college graduates but far worse for those without a college education," said study co-author Anthony P. Carnevale in a Georgetown University press release. "At a time when more and more people are debating the value of postsecondary education, this data shows that your chances of being unemployed increase dramatically without a college degree."

Recovery-based job creation has also favored educated workers: According to the report, almost half of the jobs lost in the recession have been recovered, and virtually all of them required some degree of postsecondary education.

"In the aftermath of the recession, the economic recovery has stagnated, but college-educated workers continue to fare better as more than half of all jobs created have gone to workers with Bachelor's degrees or better," wrote the authors in an executive summary.

This appears to be the case virtually across the board, not just within industries that traditionally favor higher educated workers.

"In every industry except healthcare services and public administration, workers with high school diplomas or less lost many more jobs than those with more education," stated the executive summary. "Even in blue-collar industries, better educated workers fared better."

The effect is so great, note the authors, that one may deduce that higher education is not just a benefit during the recovery, but is actually driving it. The GU press release notes that the data underscores the value of ongoing education not just for individual workers, but for the national economy at large.

According to the GU press release, the study confirms the benefit education has had on wages, too: The "wage premium" for bachelor's degrees or higher relative to high school diplomas grew from 44 percent in 1981 to 100 percent in 2005. Furthermore, it has only fallen to 97 percent since the start of the recession.

The study also evaluated sex-based differences regarding the pursuit of higher education. According to Inside Higher Ed, in the years leading up to the recession, men were less likely than women to enroll in college. The inverse is now true. Men are also more open than ever to pursuing careers in female-dominated fields such as nursing.

"The Great Recession has produced an economic reckoning for men who stopped their education at high school or before," the report says as quoted by Inside Higher Ed. "...Men now realize that they need more than a high school diploma to get a job and that they shouldn't limit themselves to fields dominated by men."