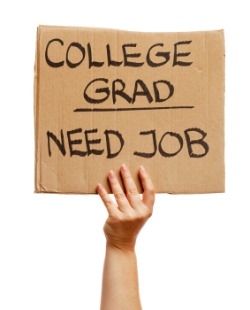 Your college major can tell you how much you're at risk for future unemployment, according to a report released Wednesday by Georgetown University's Center on Education and the Workforce.

"People keep telling kids to study what they love--but some loves are worth more than others," Anthony P. Carnevale, the lead author of the report and the center's director, told The Washington Post. "When people talk about college, there are all these high-minded ideas about it making people better citizens and participating fully in the life of their times. All that's true, but go talk to the unemployed about that."

The analysis comes during an ongoing debate over whether a college education is worth the increasing cost.

The study, "Hard Times, College Majors, Unemployment, and Earnings: Not All College Degrees Are Created Equal," used 2009 and 2010 data from the U.S. Census Bureau's American Community Survey, for 22 to 26 year olds with bachelor's and graduate degrees.

Architecture majors fare the worst, with unemployment at 13.9 percent, due to the decline of the construction industry during the recession, the Los Angeles Times reported.

Generally, unemployment is higher among recent graduates with nontechnical degrees, like the arts (11.1 percent), humanities and liberal arts (9.4 percent) and law and public policy (8.1 percent). Degrees in fields such as business, psychology and social work, engineering and journalism are linked to a jobless rate between 7.3 and 7.5 percent.

On the other hand, unemployment rates are lowest among graduates who studied health and education (5.4 percent for both majors) and agriculture and natural resources (7 percent), reported The Washington Post.

Interestingly, the study found that some degrees that are believed to be hot really aren't. As the Los Angeles Times pointed out, computer specialists who design software and applications are doing well job-wise, but information specialists using the technology aren't--these professionals face an 11.7 percent unemployment rate. Likewise, business majors are doing well, but those in hospitality management are struggling due to a decline in travel and tourism.

The study also addressed the value of various majors with respect to earnings, noted The Washington Post. Over a lifetime, the wages of workers with degrees in engineering, computer science or business were as much as 50 percent higher than the income of those who majored in the humanities, arts, education and psychology.

Still, the report indicated that the more education you have, the better your job prospects. Only 3 percent of graduate degree holders are out of work, the Los Angeles Times noted. This compares to recent bachelor's degree holders (8.9 percent jobless rate), those with a recent high school diploma (22.9 percent) and those who dropped out of high school (31.5 percent).

Fortunately, for most recent college graduates, unemployment should drop as the economy improves, Carnevale told The Chronicle.