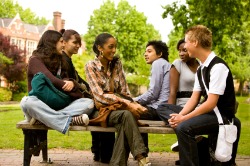 Facing financial troubles and a sluggish economy, Georgia may be forced to cut a popular college scholarship program it offers to high school students who maintain good grades, officials said.

The Hope scholarship, the largest merit-based college scholarship program in the US, offers any Georgia high school student with a B-average or higher four years of free college tuition, The New York Times reported.

Fiscal woes stemming from the recession and dwindling federal stimulus funds have forced Georgia to seriously consider scaling back the scholarship. Founded in 1993, the program used to be covered easily by Georgia's state lottery. The initiative drew support for improving student test scores, appealing to middle class families and bolstering the state's education system. Since then, 15 states have copied Georgia's lottery-based scholarship, facing similar challenges to cover the program's costs.

A majority of the freshmen in Georgia qualify for the scholarship, which pays for tuition, some books and fees--but not housing costs--at any Georgia university or technical school.

Doling out more financial aid per student than any other state, Georgia has provided a total of $5.6 billion in educational support since the program started and offers as much as $6,000 a year for some students.

The program's popularity, however, has led to unavoidable fiscal problems. According to state budget estimates, lottery sales are short $243 million for the year and as much as $317 million the next.

State legislators emphasize that the state's financial bind has put officials in a tough position.

"We trust and we hope the people in the state of Georgia understand the position we're in," State Representative Len Walker, a Republican who leads the House Higher Education committee, told The New York Times.

With about 200,000 students depending on the program to pay for college, Georgia college students say they will not be able to afford to pay for their education if the state dispenses with the scholarship, WALB noted.

"Without the HOPE scholarship, I feel like a lot of people wouldn't be able to attend college," said Darton College student Tequela Dukes.

Some officials are making recommendations in an effort to save the program, suggesting an increase the GPA requirement for incoming freshmen, rejecting students enrolled in remedial course work and adding financial need as a factor in admission criteria.

At Georgia State University, student government leaders believe starting the Hope scholarship in the form of a temporary loan and imposing a timetable for obtaining a degree under the scholarship would help sustain the program, FOX 5 Atlanta reported.