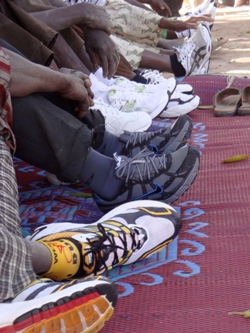 Greg Woodburn is a sophomore at the University of Southern California, where he is majoring in History and double-minoring in Painting and Entrepreneurship. For most 20-year-olds, that would be enough to fill the day.

Not for Woodburn. In addition to his studies, Woodburn is a member of the USC Track & Field team, the Men of Troy cross country club and is the founder of Give Running, an organization dedicated to providing running shoes to disadvantaged athletes worldwide.Founded when he was just a sophomore in high school, Give Running has to date donated over 6,000 pairs of used running shoes, providing countless opportunities on the track and off. Greg Woodburn, who was recently featured in People magazine, slowed down to talk to Heather O'Neill about his gallop into the non-profit world.

Heather O'Neill: Tell me a little bit about your background in running.

Greg Woodburn: Running has been a huge part of my life since I was 8 years old when I started Youth Track and Youth Cross Country. I remember just loving the sport of running from the beginning in the sense that there is a team aspect where you are trying to score points for your team and play with your teammates and push each other on, but there is also that personal element also where you can go out there and race the clock and try to run your personal best. So it is really one of those sports that has team spirit but room for self-improvement also.

Heather O'Neill: So you started at 8-years-old?

Greg Woodburn: Yes, and then I continued. Going into high school (Ventura High School in Ventura, Calif.) I was really excited about running still. Then my freshman year I got a stress fracture in my hip that had me sidelined for most of the year while it was healing. And then again my sophomore year I had these on and off knee problems that had me again out for a lot of the year. Between having two serious injuries and being taken away from running for so long, it made me realize how much running meant to me and what a big part of my life it was.

Greg Woodburn: One of the really frustrating things I found was that, especially for the stress fracture, there wasn't really anything that I could do to make it heal faster. I just had to take time off and let it rest

At first I was really disappointed and frustrated but my parents and my sister, who have always been really supportive of me, tried to encourage me to think about what other people are going through and empathize with them as a way to help put what I was going through into proper perspective. I started thinking about how I was injured now but that eventually I would be healthy again and be able to race with my friends and compete but I knew that there were kids out there who weren't getting all of those great benefits and opportunities not because they were injured but because they didn't have a pair of running shoes.

One great thing about running is that it is so simple; you don't need to have a lot of fancy equipment. A good pair of shoes go a long way. I had old pairs of running shoes in the garage that I had put lots of miles on. I had teammates who would throw their old shoes in their garage after they had put a lot of miles on them. I decided that during this time when I was away from running myself that I would try to give back to the sport itself by sharing my love of running with others.

Heather O'Neill: How did you plan to do that?

Greg Woodburn: I really started small and just collected shoes from my teammates and my family and friends. This was back in late 2006. My goal was to collect 100 by Christmas, which gave me about two months, to collect and clean and give out 100 pairs of shoes. People just got so behind it. I got a collection box set up in the local running store and the whole running community got behind it. I wound up collecting 500 pairs of shoes, which was more than anything I could have anticipated. The overwhelming support and how much I enjoyed it encouraged me, instead of having a one-time shoes drive, to make this a year-round endeavor. 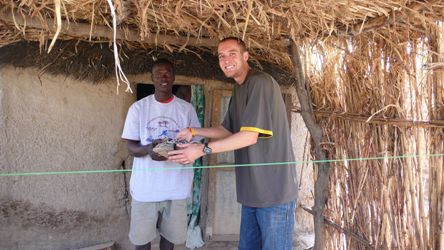 Heather O'Neill: So how has the project evolved?

Greg Woodburn: Once I arrived at USC I started the new chapter here. I have been working to get people involved here and people have been contacting me from across the U.S. asking about how to collect shoes in their local community and I have helped to get them involved too. I have also had some outreach internationally, from places like Mexico and Ireland, where they have heard about what I am doing and want to help. It has grown from the grassroots level.

Give Running has grown from a collection bin in a Venture, Calif. running store to a 501(c) non-profit, a milestone Woodburn calls, "very exciting."

Heather O'Neill: How has the USC community responded to your efforts?

Greg Woodburn: They have been really enthusiastic. This whole campus has a really great philanthropic spirit. There are so many community groups and student organizations dedicated to reaching out and helping others.

Heather O'Neill: How do you determine where the need is and how to do you get the shoes into the hands of the appropriate people?

Greg Woodburn: Because we are still so small and have limited funds, from the beginning we have been partnering with a non-profit based in San Diego called Sports Gift. Sports Gift distributed all kinds of sports equipment to children in need. They have helped us to donated running shoes to disadvantaged youth internationally. They take Give Running's shoes to orphanages in Sudan and Uganda and Liberia, as well the Dominican Republic, Haiti and to some in Mexico also.

Also, USC has really helped with both the international and local outreach. From the beginning I had the goal of helping youths both locally and internationally. There is so much need.

Heather O'Neill: What is the criteria for someone receiving a pair of your shoes? Do they have to be affiliated with an athletic group or running club or are these shoes also for people who just don't have shoes?

Greg Woodburn: People don't necessarily have to be affiliated with a running group, most just don't have a good pair of shoes. Some of the feedback we received after donating in West Africa was that this wasn't just their first pair of running shoes, this was their first pair of shoes period. These kids aren't just wearing these shoes to run in; they are wearing these shoes to walk to school in. In some places there is a requirement that children wear shoes to be able to attend school so in some cases we are providing opportunities beyond athletic opportunities. We are in some cases providing access to an education and a better life. 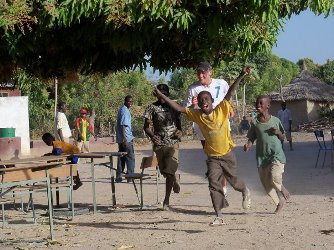 Greg Woodburn: One program we are trying to get started is an Adopt a Runner program where people can buy training or racing shoes for disadvantaged middle school or high school kids here in the U.S. These kids don't have the means to buy what they need so it can make it tough for them to participate in sports like cross country and track. This will help these runners have the opportunity to compete and stay healthy. Our goal is for people to sponsor these kids year after year and forge a connection and keep track of how they are doing in their sport and in school.

One goal moving forward is to find a corporate sponsor so that we can begin donating new shoes. If there are shoes with cosmetic blemishes but that are still completely functional we'd love to donate more and more of those shoes along with the used shoes.

Heather O'Neill: As for the future how do you see the organization expanding or continuing? Or do you plan to pass the baton to someone at USC when you graduate?

Greg Woodburn: The chapter here at USC is a student organization for when I graduate I expect some of the younger people involved to continue and to lead the USC chapter going forward. As much as I have done so far, so much of Give Running's success has been because of people who hear about our story and want to donate their time or donate their shoes and spread the word. It has been people coming out to give what they can give that has allowed us to reach so many people so we will continue to grow in that way.