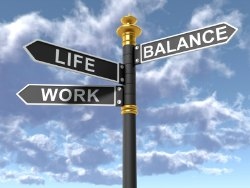 As some companies continue to keep the purse strings tight in a sluggish economy, there are those offering non-traditional perks to employees in lieu of impressive raises and bonuses. Benefits that support work-life balance -- or the ability to happily manage one's life both in and out of the office -- are increasingly popular. According to a new survey, however, some companies rise above the rest in this area.

Glassdoor has published its 2012 list of the Top 25 Companies for Work-Life Balance. According to a Glassdoor press release, the company analyzed thousands of employee reviews from the past year and gave each a numerical rating for work-life balance. The resulting list offers insight into which companies have gotten the work-life equation right, and how.

"In today's highly connected world, striving for work-life balance can feel virtually impossible given greater access to our jobs around the clock," Glassdoor career and workplace expert Rusty Rueff said in the Examiner. "Companies that make sincere efforts to recognize employees' lives outside of the office will often see the payoff when it comes to recruiting and retaining top talent."

Glassdoor reports that MITRE and North Highland topped its list, rating 4.5 each on the 5-point scale. Agilent Technologies, SAS and CareerBuilder rounded out the top five.

CNBC notes that in today's economy, companies of all types are prioritizing work-life benefits for their workers.

"It's something that's in the employer's arsenal that will help employee satisfaction and keep morale up," Samantha Zupan, the corporate communications director at Glassdoor.com, told CNBC. "It's simple things. If telecommuting is an option and productivity is up -- why not? How much does a ping-pong table cost?"

Tech companies -- often known for workplace perks such as on-site massages and free food -- fared well on the list: According to CNET, tech organizations comprised 12 of the 25 companies featured. Of those, only LinkedIn, Orbitz and CareerBuilder are household names; the rest are smaller tech firms. Financial firms also fared well.

Well-known social media giant Facebook, which ranked number 7 on the list last year, was notably absent from this year's list. CNET notes that the social network -- once hailed for its employee-friendly work environment -- has received a lot of press lately about high-level executives moving on to different companies. Its employees' biggest complaint: Long working hours. According to CNBC, other companies that fell off this year's list include Nestle Purina PetCare and Southwest Airlines, which ranked number one and number 17, respectively, in 2011.