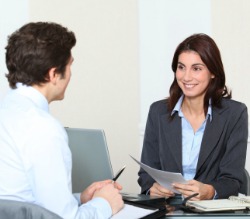 How many golf balls can you fit in a Boeing-747? What would you charge to wash every window in Seattle? Seemingly impossible brainteasers like these are a lot of fun at a dinner party, but what about a job interview? Head-spinning questions are just one of the features that landed some businesses on Glassdoor's annual list of companies that give the most challenging interviews.

The rankings are based on anonymous reviews in which job applicants rated a company's interview difficulty on a 5-point scale, 1 being very easy and 5 being extremely difficult. Topping the list, for the third year in a row: McKinsey & Company, a consulting firm. McKinsey & Company earned a 3.9 difficulty rating. For perspective, the site-wide average for all employers featured on the Glassdoor list is 2.8. According to Mashable, consulting firms like McKinsey & Company and Boston Consulting Group (No. 3) are notorious for their rigorous screening processes, but several Silicon Valley companies also appeared prominently on the list, such as Google (No. 8), Citrix (19), Microsoft (No. 16), and Facebook (No. 22).

Google earned a reputation for dishing out difficult interviews long ago thanks in part to its brainteaser-like questions. (Think: Why are man-hole covers round?) The company made headlines earlier this year when it announced it would nix such mind-boggling questions from its interview process. Laszlo Bock, Google's SVP of people operations, told The New York Times that brainteasers were a waste of time that didn't predict job success and just made interviewers feel smart. Instead, the company is building an interviewing strategy that includes behavioral questions that test problem solving.

This year's Glassdoor rankings revealed another trend in hiring this year: The length of the full interview process is growing -- and fast. Mashable notes that the average interview period swelled from 12 days in 2010 to 23 days in 2013, and companies featured on this year's Glassdoor list are likely to take even longer. Interviewees for McKinsey & Company report an average interview time of 39 days, for example, and Google and Facebook make candidates wait 37 and 30 days, respectively.

On the bright side, WebProNews notes that candidates who survive these tough interviews may be more likely to approve of their bosses -- at least those at the top of the corporate ladder. Earlier this year Glassdoor ranked the nation's most loved CEOs. Facebook's Mark Zuckerberg topped the list with a 99 percent confidence rating, and Google's Larry Page earned 95 percent.

Other companies in the top 10 of this year's list of the most difficult companies with which to interview included: ThoughtWorks, Boston Consulting Group, Gartner, Bain & Co., Rolls-Royce, ZS Associates, Stryker and HubSpot.

"You're Probably Not Prepared to Interview At Google or Facebook," webpronews.com, August 13, 2013, Josh Wolford