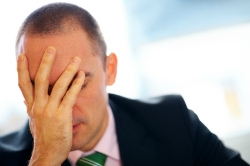 Employed and unemployed Americans are more concerned about their companies' futures and about landing jobs than compared with three months ago, a recent survey showed.

According to a press release, a third-quarter Glassdoor Employment Confidence Survey indicated more than half of employed adults (56 percent) and most unemployed job seekers (91 percent) believe the recent swings in the economy and financial markets will negatively affect their career, employment or job hunt. Furthermore, optimism toward pay raises remained the same, while optimism toward layoffs has increased slightly. Meanwhile, many reported feeling pessimistic about company outlook and job market.

"Employee confidence in the job market and compensation levels appears to be at a pause, in much the same way the economy is stuck between growth and contraction right now," Rusty Rueff, a career and workplace expert with Glassdoor, told Reuters. Glassdoor is the Sausalito, California-based workplace culture website behind the survey.

Harris Interactive, a market research firm, conducted the survey. The 2,291 respondents were at least 18 years old, employed or unemployed and seeking work.

The percentage of employees who thought they may be laid off decreased six points to 16 percent, the lowest level since the second quarter of 2010. Nearly one-third (32 percent) thought coworkers could be laid off in the next six months. Expectations of pay raises remained the same as last quarter. Slightly more than one-third (36 percent) of employees anticipated a raise within a year, with men (40 percent) more optimistic than women (36 percent).

Thirty three percent of respondents expected their company's outlook to improve in the next half-year. This dropped seven points from the second quarter (40 percent) to the lowest level since December 2008. Men (38 percent), however, were more hopeful than women (28 percent).

Thirty six percent of unemployed job seekers, the highest number in five quarters, were unsure if they would land a job in six months. One-third (33 percent) of employed people, more than last quarter, said if they lost their current position, they likely wouldn't replace it with one matching their experience and pay within six months' time.

Rueff recommended that Americans do whatever they can to advance professionally and remain highly desirable to employers, FINS reported.

"People are invited to make changes every day--they read the news that certain skills are in demand, they hear from their bosses or in the hallway that there are opportunities to prepare for upcoming changes that they're invited to participate in," he said, but most people wait until circumstances force them to take action. "If you wait for the situation to change, you're going to be in trouble," he added. "Take the invitation."