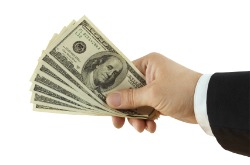 A recent survey revealed that for the first time since 2008, employees are more optimistic that they will get a pay increase within the next 12 months.

According to Life Inc., Glassdoor, a free jobs and career community, released its quarterly Employment Confidence Survey. Based on responses from some 2,000 adults, Glassdoor found that 43 percent expect a pay raise, which is the highest percentage since the company began the survey in 2008. Interestingly, according to a Glassdoor press release, confidence in salary differed between men and women--men (45 percent) reported being more optimistic about a pay raise in the next 12 months than women (40 percent). Younger workers were also more optimistic than older employees--49 percent of workers 18-34 years old said they expect an increase in pay versus just 34 percent of workers 55 years and older.

"[Employees] are starting to see the picture sharpening, which industries are improving," said Rusty Rueff, a career and workplace expert at Glassdoor, to CNBC.com. "I'm not saying we're in high-definition yet, but they are gaining in confidence."

According to the press release, even unemployed job seekers are feeling more optimistic about the job market. More than one-third of unemployed respondents who are actively looking for work said they felt it was "likely" that they would find a job that was in line with their experience and compensation levels in the next six months.

Current employees, however, do not seem to share the same sentiment--30 percent of respondents said it would be unlikely for them to find a job that matched their experience within six months. Thirty three percent of employees also reported that they were still worried that co-workers could get laid off in the next six months while 19 percent worried that they themselves could be laid off.

"Even though consumer confidence is up and the unemployment rate is down, employees remain tentative about the market," said Rueff. "Employers should pay attention to employee expectations around pay and be more transparent to ensure employee sentiment is aligned with reality, which will help avoid disappointment that can impact morale."

According to CNBC, Glassdoor conducted its survey in mid-March.