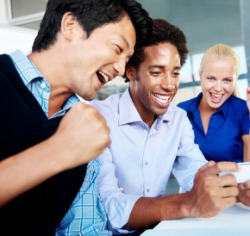 Career site Glassdoor recently released its annual "Best Places to Work" list for 2014 and a total of 15 Bay Area companies made the top 50 list.

Based on employee surveys and reviews regarding overall satisfaction, Bain & Company was ranked the No. 1 place to work in 2014, followed by Bay Area companies Twitter and LinkedIn at No. 2 and No. 3, respectively. Other Bay Area companies that made the list include Google, which according to MarketWatch dropped to No. 8 from No. 6 last year, and Facebook, at No. 5. Last year, Facebook took the No. 1 spot. Not so surprisingly, most of the Bay Area companies that made the list are in the tech industry -- Intuit (No. 33), Apple (No. 35), eBay (No. 49) and Salesforce (No. 50), just to name a few.

While much of Silicon Valley's tech sector is known for its lavish perks, CBS San Francisco noted that the free food, fitness centers and shuttles are not the only reasons why these companies earned their rankings.

"At the end of the day, the ability for employees to grow and to work in an amazing culture is definitely what keeps them excited about a workplace," said Glassdoor CEO Robert Hohman to CBS San Francisco. Additionally, in MarketWatch, Hohman noted that many reviews from engineers, designers and managers in the tech industry talked about how their work impacted hundreds of millions of people.

Such a concentration of top companies, however, has created some tension.

"I do not see an end to the war for talent in the Bay Area," noted Hohman in MarketWatch. "We're seeing near-boom levels of salary inflation. We're seeing salaries rise aggressively for tech and product managers across the board."

While rising salaries benefit the Silicon Valley employees who earn them, it has created tension in San Francisco between the tech sector and the city's middle and working class poor. As The New York Times reported, many longtime San Francisco residents have reached the tipping point, frustrated with how the tech sector is changing the city's identity and values. Many have bashed the growing elitist culture that can now be found in many of the city's once quaint and diverse neighborhoods.

The biggest concern, however, is affordable housing. As The New York Times noted, San Francisco now has the least affordable housing in the nation, with just 14 percent of homes accessible to middle-class buyers. The rental front is not much better -- the median rent is also the highest in the country, at $3,250 a month for a two-bedroom apartment. Furthermore, evictions in the city are up 38 percent since 2010, according to KQED, and Ellis Act evictions -- when a landlord evicts tenants in order to sell a building -- are up 170 percent.

According to The New York Times, many residents are placing the blame on the tech boom, but some say the city government is primarily at fault.

"There has to be some kind of public support to make sure you don't just have a city of the very wealthy, but people to make the city run," said Kevin Starr, professor of history and policy, planning and development at the University of Southern California, to The New York Times. "You can't have a city of just rich people. A city needs restaurant workers, a city needs schoolteachers, a city needs taxi drivers."

Despite the backlash, however, KQED noted that, according to a USF study, San Franciscans are not necessarily against the tech boom. Many acknowledged that companies have brought numerous benefits and 69 percent of respondents said the city and its economy are "generally going in the right direction". USF political science professor and co-author of the study Corey Cook, told KQED that locals are frustrated with the lack of balance. Cook explained that San Franciscans want the businesses here, but are looking for something in return.

"Voters are generally still saying, 'No, we want the jobs here in San Francisco…[but] we want [businesses] to play a role in the city, so we don't just have them locate here and not be a part of the civic community,'" explained Cook to KQED.