GMAC Report Shows A Decline In Applications To MBA Programs 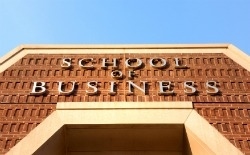 Inside Higher Ed reported that while this decline follows several years of growth, it is not entirely unexpected. GMAC officials and business school admissions officers attribute some of the loss to the economy: students are more reluctant to put their careers on hold to pursue higher education.

"We're coming off a peak year and we are in a slow, jobless recovery, so it's not surprising to see this decline," David A. Wilson, GMAC president and chief executive officer, told Inside Higher Ed.

The GMAC report also found that part-time programs saw applications either hold steady or rise slightly, which may also be a result of workers who don't want to leave their current job.

"In this prolonged economic downturn, many people are making the economic decision not to leave the work force for two years, but to continue working and attending part-time programs," GMAC spokesperson Robert Ludwig tells The Chronicle of Higher Education.

Inside Higher Ed reported that application growth in 2009 and 2010 was buoyed by recently unemployed business professionals hoping to improve their resumes, but this bubble may have burst.

MBA applications may be dwindling slightly, but the GMAC survey did highlight some promising trends. Inside Higher Ed reports that though fewer in number, the quality of MBA applicants increased. Meanwhile, applicant pools for specialized master's programs--such as accounting or finance--actually grew. This shift may be a sign that while business schools are losing some of their experienced, work force applicants, they are attracting recent college graduates looking for a competitive edge in the job market.

MBA application pools also appear to be diversifying. According to The Wall Street Journal, 45 percent of applicants to U.S. programs were from other countries, up from 39 percent the year before. India and China had the biggest numbers, accounting for 57 percent of international applicants; only 4 percent were European.

Yet despite a more international applicant pool, the survey indicated that the gender divide remains grim: women accounted for 35 percent of two-year MBA applicants, 34 percent of applicants to one-year programs and just 27 percent of the pool for executive MBA programs. The latter statistic may be the most troubling because, as The Wall Street Journal noted, executive programs are designed for those with at least 10 years of work experience.

"Who Is Applying to Business School?" online.wsj.com, September 13, 2011, Melissa Korn