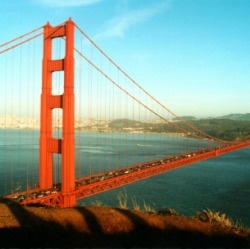 On Wednesday, the historic Golden Gate Bridge in San Francisco moved to a completely electronic, cash-free tolling system, a change that has left its traditional toll-takers out of a job, reported the Marin Independent Journal. The transition to an all-electronic system aims to reduce cost, alleviate traffic buildups, and increase overall efficiency. Some are concerned, however, that the loss of traditional toll collecting only further de-personalizes our daily lives.

Mercury News reported that the new system cost $3.2 million but is expected to save the bridge district about $16 million in employee wages and benefits over the next eight years. As the bridge is presently facing a $66 million budget deficit over the next five years, bridge district managers decided to make the investment, despite the long history many bridge toll workers have had with the district. Bridge district president Jim Eddie explained that laying off longtime workers was difficult but necessary. "It's a real change, but technology has got its place and it's here to stay," he told Mercury News.

According to KQED, drivers across the Golden Gate Bridge can either use FasTrak or open a License Plate Account that charges a credit card registered with their vehicle. The new technology takes a picture of drivers' license plates as they cross the toll booth and sends invoices to people who do not pay automatically through FasTrak or the License Plate Account.

To commemorate the last day of traditional toll-taking, Eddie and a colleague drove a 1937 maroon Packard through the toll booth. "It actually was the first car to cross the bridge when they opened it in 1937," he explained.

Former toll-takers have received an outpouring of support from the local community. Marilyn Alvarado, the last toll collector to leave the bridge shortly after midnight, told Mercury News, "I want to thank the public for all their kind words and generosity. […] We've had so much generous support." Dawnette Reed, another toll collector, said, "I had a lot of customers who wanted to hug me. I got four bouquets of flowers, coffee, multiple cards, gift cards, and baked goods."

Despite this support, many bridge toll employees are sad to leave. "I love my job. I'm sad to be leaving it. If I had my choice I'd work here for many more years," former toll collector Marsha Brandhorst told the Marin Independent Journal. As Brandhorst explained, that connection with commuters was one aspect of her job that she enjoyed the most: "Over the years, you see the kids grow up. You see couples who get married and start having kids of their own. Then there's the older people you don't see anymore and you wonder what happened to them."

KQED noted that bridge toll-takers had more diverse responsibilities than simply collecting money. Toll collectors are often called upon to assist in roadside health emergencies or to report drunk drivers and vehicle accidents. Tourist commuters also frequently ask bridge toll employees to help them when they are lost. San Francisco resident Peter Lavezzoli explained his view of the situation to Mercury News: "I think it means that we're more interested in conveniences as opposed to human interaction. […] It's another step toward the de-humanization of our society."