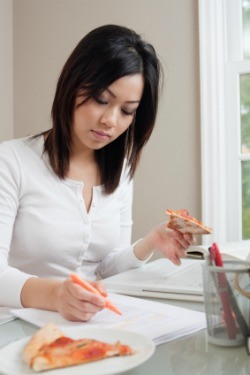 College students gaining an average of 15 pounds during their freshman years is a myth, one that may have serious implications, according to an Ohio researcher.

Rather, the typical freshmen gains between 2.5 and 3.5 pounds during their first year, found Jay Zagorsky and Patricia Smith, both researchers and economists from Ohio State University and the University of Michigan-Dearborn, respectively. Their study on the "Freshman 15" is available in the December 2011 issue of the Social Science Quarterly journal.

"People who go to college do gain a little bit more than similar people who don't go to college, but it's not really that much extra," Zagorsky told The Columbus Dispatch.

For the study, the researchers used data from more than 7,000 teenagers who participated in the National Longitudinal Survey of Youth 1997, a program in which their weight and other information were tracked annually since. The U.S. Department of Labor commissioned that study.

The danger of the myth behind the freshman 15 is that use of the phrase could contribute to a young person's perception of being overweight.

"Weight gain should not be a primary concern for students going off to college," Zagorsky is quoted as saying in OSU News.

He described the freshman 15 as a media myth. Study results showed the typical college female gained 2.4 pounds in her first year. Women of the same age group not attending college added about two pounds in the same period. Among males, the disparity was smaller.

"Most students don't gain large amounts of weight," Zagorsky was quoted as saying in PsychCentral. "And it is not college that leads to weight gain--it is becoming a young adult."

Researchers analyzed various factors that many believe can contribute to first-year weight gain. They found that dorm living did not contribute to weight gain. Neither did attending college full- or part-time, pursuing a two- or four-year degree or going to a private or public institution. Heavy drinking, defined as consuming six or more drinks on at least four days per month, did have an impact, though not much. Heavy drinkers gained less than a pound more than non-heavy drinkers.

On the extreme end of the spectrum, The Columbus Dispatch noted that the study revealed those who gained the most had increased their weight by 18 pounds (about five percent of weight gainers). In contrast, one-quarter of all students lost weight.

Results showed students typically did gain weight during their entire college careers, about 7 to 9 pounds total for women and 12 to 13 for men. Following college, the average graduate gained 1.5 pounds a year.

While putting on weight during freshman year should not be a worry for most students, they should look into pursuing a healthy lifestyle, Zagorsky advised in OSU News.

"Students should begin developing the habit of eating healthy foods and exercising regularly," Zagorsky said. "Those habits will help them throughout their lives."