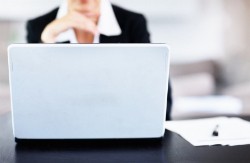 On Wednesday Google unveiled what it believes to be the future of corporate computing: the Chromebook.

According to Google's Enterprise Blog, the Chromebook offers "uncompromising speed, simplicity and security" and can potentially save companies thousands of dollars per employee each year. In partnership with Samsung and Acer, the Chromebook relies on cloud computing--everything can be done on the Web via Google's Chrome web browser rather than on the desktop or programs. As a result the device boots in just eight seconds and provides multiple layers of ongoing security to keep company information safe.

Google reported that, according to Gartner Research, companies spend between $3,300 and $5,800 per year per desktop computer; employee laptops can cost even more.

"When you look at the overhead of storage, and monitoring agents and antivirus, on top of the cost of laptops--and the fact that any of these can break down, all these things add up," said Logitech VP of information technology Sanjay Dhar to Wired.

Businesses can lease Chromebooks for $28 a month. In addition to cutting costs of storage and antivirus software, the device is centrally configurable by an IT staff--features that can save companies 50 percent a year over current costs.

The Washington Post reported that Google also hopes Chromebooks will be a hit among younger buyers, particularly college students who will be joining the workforce soon. Chromebooks for education cost $20 per month.

Despite the rise of cloud computing and the fact that today's generation is already comfortable working on the Web, the question of whether customers--and companies--will trust all their information in the cloud remains.

According to Google's blog, however, some may be ready to take the leap. Participants of its pilot program for testing Chromebooks praised the device. Sales managers were pleased with its long battery life and integrated 3G, which allowed them to work more often from just about anywhere. IT administrators said Chromebooks were easier to manage and had fewer security issues, especially when it came to viruses and losing confidential data.

The Washington Post reported that Chromebooks will go on sale June 15 in the U.S., Britain, France, Germany, the Netherlands, Italy and Spain. However, according to Google's blog, businesses and schools interested in Chromebooks for Business and Education can already start contacting Google about them.

"New computers for the browser-based world," googleenterprise.blogspot.com, May 11, 2011, Rajen Sheth