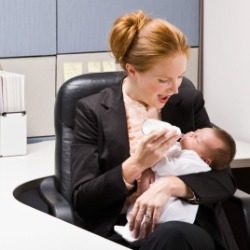 According to a new report by the Bureau of Labor Statistics, "Highlights of Women's Earnings in 2012," female workers earned roughly 81 percent of the median earnings of male full-time wage and salary workers in 2012. And, as if that wasn't bad enough, statistics show that female parents may be taking an additional hit in pay.

Additional disparities stand out when comparing the earnings of men and women with and without children. For instance, as CNBC pointed out, men with children actually make more money simply because they're parents. This "daddy bonus" is illustrated in the report, as men with children under 18 earned a median weekly income of $946 compared to men without kids who earned a median weekly income of $799. With income differences as apparent as these, it's no wonder why many believe parenthood plays a role in worker compensation, or lack thereof.

"I think parenthood is like the new site of gender discrimination," Michelle Budig, a sociology professor with the University of Massachusetts at Amherst who worked on the report, told CNBC.

But, if becoming a parent increases the likelihood of discrimination, why aren't the wages of fathers suffering? Apparently, it may just boil down to old-fashioned gender roles, says Budig.

"Men who conform to expectations of what makes a good man -- being a highly educated, married father -- [are] more valued as an employee." Employers may also assume that the men are breadwinners, which could lead them to pay more. According to the study, the fatherhood bonus tends to benefit well-educated white and Hispanic fathers more than fathers from other races.

Opinions vary as to why women are paid less, particularly mothers. Many employers may believe that mothers of young children have less time to dedicate to work, and may need to be home with their children more often. And as the Examiner pointed out, mothers in the workforce may have less job experience since they have to take time away to have, and care for, each new child.

But, women often knowingly make those trade-offs in order to spend more time with their children, and it isn't fair to penalize all women. The problem arises when employers assume that all women with children are predisposed to be less productive, says Francine Blau, an economics professor at Cornell University.