Government Shutdown Would Have Costly Consequences 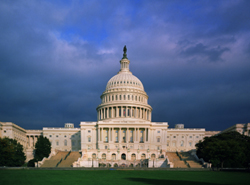 As Congress and the White House continue to battle over the federal budget, agencies are beginning to prepare for a government shutdown.

As The New York Times reported, federal agencies cannot operate if Congress does not authorize spending. If Republicans and Democrats don't reach an agreement by Friday April 8, when current authority is set to expire, the federal government will be forced to shutdown, leaving only those who perform "essential" operations, such as protecting human life and federal property, at the office. CNN Money reported that such service includes air traffic control, national security and the Postal Service as well as workers who provide medical care on the job, handle hazardous waste, inspect food, patrol borders, guard inmates and protect the banking system. According to White House officials, that would mean that some 800,000 workers would stop working, stated The New York Times.

CNN Money also reported that more than 1 million essential workers would be asked to come to work, but they wouldn't receive pay.

"Employees are waiting and hoping that shutdown will be averted," said Colleen Kelley, National Treasury Employees Union President. "But they are anxious because of the uncertainty. They want to know if they will be working."

Prolonged negotiations could have devastating and expensive consequences, noted MSNBC. Back in 1995, a six day shutdown and a record three-week closure cost the government more than $1.25 billion. The Government Accountability Office reported that a gap of just three days in 1991 cost $607 million, including $363 million in lost revenue and fees.

However, a government shutdown doesn't affect only federal workers and those who need their services--it trickles down to nearby businesses as well. As MSNBC pointed out, during the 1995 shutdown, the Interior Department reported that businesses and local governments lost almost $300 million due to national park closures. Additionally, a study conducted by the National Parks and Conservation Association found that small businesses were still suffering from the decline in tourism revenue even a year after the shutdown.

As of now, a budget breakthrough is still not in sight, which makes a government shutdown very likely. According to MSNBC, should the government close after Friday, this will be the 17th closure since 1977.

"Federal Departments Lay Out Plans in the Event of a Government Shutdown," NYTimes.com, April 6, 2011, Robert Pear

"The cost of keeping the lights off," firstread.msnbc.msn.com, April 7, 2011, Carrie Dann