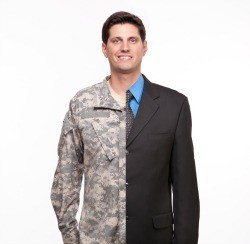 The Obama administration recently announced the launch of a new government website, ebenefits.va.gov, aimed at helping veterans and service members transition from military duty to the civilian workforce. As The Hill reported, First lady Michelle Obama and Dr. Jill Biden made the announcement at a veteran jobs summit at Fort Campbell, Kentucky in an effort to spread the word about the innovative online initiative. According to a recent White House press release, the online tool, also known as the Veterans Employment Center, was also created to consolidate the many employment resources for veterans into one easy, one-stop shop.

"Our service members haven't always had the time or information they needed to prepare their resumes, to plot their career goals, to meet with employers and get the jobs they deserve. And that's simply not acceptable," said the First Lady. "As my husband has said, when you've fought for this country around the world, you shouldn't have to fight for a job when you return home. Starting today, every single service member, every veteran, and every military family will have access to a new online tool that will revolutionize how you find jobs in both the public and private sectors. All you have to do is log on to ebenefits.va.gov."

In addition to helping connect veterans with potential job opportunities, the Veterans Employment Center plans to offer such features as a resume-builder, military skills translator, and career and training resources. The website also intends to assist military spouses, who, according to The Tennessean, may also need help with their job search due to sacrifices they have made as a result of their spouse's military service.

"Our service members transitioning to civilian life, as well as their spouses, deserve the resources they need to be successful," stated Secretary of Defense Chuck Hagel in the press release. "Through this effort, they are getting that help. Our troops and their spouses are proven leaders, highly-skilled and hard-working. Employers hiring them are getting the best this nation has to offer."

As The Tennessean noted, Fort Campbell officials estimated that 450 to 600 soldiers transition back to civilian life on any given month -- a small portion of the 700,000 to 800,000 veterans already in the job market. Fortunately, several businesses have stepped up to the plate in terms of hiring veterans. Examples include UPS, which plans to double its jobs for veterans by the end of 2018, and Xerox, which intends to hire 10,000 veterans and military spouses.

Additionally, The Hill reported, the Military Spouse Employment Partnership, which launched in 2011, has grown to include 228 employers that have pledged to hire veterans.