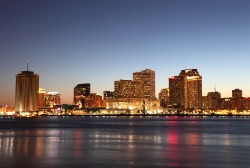 In an effort to raise poor graduation rates, Louisiana Governor Bobby Jindal continued to defend his controversial idea to merge the University of New Orleans with the Southern University at New Orleans. Jindal urged state legislators to cast partisanship and political loyalties aside for the sake of struggling students, The Times-Picayune reported.

"At the end of the day we need to do what's best for the students," Jindal said. "Forget the politics, forget the turf."

The merger has become a subject of hot debate, as state and college officials explore ways to incorporate SUNO, which has an abysmal 5 percent graduation rate, into UNO, which has a graduation rate of just 22 percent. A primary reason why Jindal is pushing for the merger, officials say, is because Delgado Community College, a nearby two-year institution, is turning away students due to over enrollment.

According to The Daily Reveille, UNO is currently part of the Louisiana State University system, while SUNO is under the Southern University system. Under the proposed merger, the LSU system would govern SUNO. Governor Jindal has requested that the Board of Regents conduct a study to analyze the potential outcomes of merging the two universities to be completed before March 20, when the next state legislative session begins.

Governor Jindal has not addressed how the administration plans to handle the uproar over losing SUNO, a historically black college for many of the poorer students around Louisiana, The Times-Picayune noted.

According to Silas Lee, a professor of public policy at Xavier University, the two schools have distinctly different missions and joining them will not necessarily lead to higher graduation rates. The larger UNO is more of a traditional four-year college whereas SUNO has typically catered to students who are the first in their families to attend college and are generally poorer, he said.

"That linear assumption of one plus one equals two may not apply because we're dealing with an uncertain economic environment," Lee said.

Indeed, educators at SUNO can attest to the dearth of resources the university faces and the meager opportunities it affords to its students, Louisiana Weekly noted.

"We have a university that does not have a library," said SUNO Board of Supervisors Chairman Darren Mire. "We right now are operating a university, talking about graduation rates--and students cannot do research in a library. We have classes in trailers."

Students, alumni, government officials and supporters of maintaining an independent SUNO congregated to voice their opposition to the merger proposed by Governor Jindal. Although the university does not boast a high graduation rate, some argue the university serves the higher purpose of providing opportunities to underserved, disadvantaged portions of the community.

"This is the only place where a 35-year-old, non-traditional student--who walked away from college, being a 19-year-old knucklehead--can come back and earn his degree," said Reverend Anthony Jeanmarie, a SUNO student.