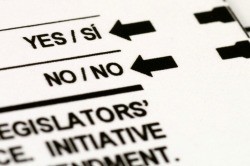 Election Day is only a few weeks away. Voters must decide not only on a presidential candidate, but also on propositions. One California proposition, Proposition 30, could significantly impact the state of California public education.

As The Sacramento Bee noted, Proposition 30 would temporarily increase taxes to help balance the state budget and raise funding for California's public schools. If the measure passes, California State University (CSU) would lower tuition in January and give a $250 refund to each student who paid a higher tuition for this term. To compensate for the lack of extra revenue from tuition hikes, the sales tax rate would increase by a quarter of a cent, and the income tax rate would rise for those earning an annual income of over $250,000. University of California tuition would remain flat for the next semester. If the measure fails, CSU would reduce the number of admitted students by 20,000. Tuition would rise for both CSU and UC schools by 5 percent and 20 percent, respectively. Furthermore, as Governor Jerry Brown mentioned during a teleconference with UC Davis's The California Aggie and other UC student newspapers, K-12 schools would lose about $4.5 billion in funding.

Despite the negative effects on college tuition if Proposition 30 fails, many students are not convinced of the benefits of the proposition. The Sacramento Bee quoted one college student, Aubrey Riley, who opposes the tax increase in the measure: "...I would rather have us who get the benefit pay the higher tuition than raise the sales tax on everyone so I can go to school." According to the UCLA Newsroom, other opponents claim that that a tax increase would hinder California's economic recovery and harm small business. They also emphasize that the state government should look to other areas of the state budget for spending cuts. Proponents of the proposition, on the other hand, believe raising taxes is a necessary measure for improving education in California: "Given the size of the tax increase in Proposition 30, I think it's a reasonable thing to ask when you look at what's happened to the state of education," said Daniel Bernstein, a junior at UCLA.

As mentioned in The California Aggie, it is important not only to have funding for education but also to improve the higher education system as a whole. Brown explained that in order to do so, coordination between community colleges, high school advanced placements, and UCs must improve, and "online learning has to be looked to wherever it can be usefully and creatively used." He also emphasizes that "the UC leadership have got to find ways of reducing expenditures that are less valuable than the core mission of the university, which is to educate students."

According to the Sacramento Bee, Brown is visiting several college campuses across the state to raise awareness of and student support for Proposition 30. Despite differing views on whether the proposition will benefit or harm California, most students agree that improvements to California's higher education system must be made. As Election Day approaches, the state comes closer and closer to finding out whether Proposition 30 will contribute to those changes.