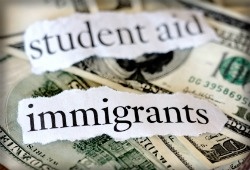 On Monday, Illinois Governor Pat Quinn signed a bill to give immigrant children in the state greater access to higher education.

According to a press release, Gov. Quinn signed the Illinois DREAM act, making immigrant students eligible for privately-funded scholarships. Senate Bill 2185, which was sponsored by Senate President John Cullerton (D-Chicago) and Rep. Eddie Acevedo (D-Chicago), creates a nine-member commission that will oversee the scholarship program. The commission will be appointed by the Governor and will establish privately-funded scholarships for immigrant students. In order to qualify, high school students must have resided with their parents while in high school, earned a high school diploma, attended school in the state for at least three years and have at least one parent who immigrated to the U.S.

"All children have the right to a first-class education," said Gov. Quinn. "The Illinois DREAM Act creates more opportunities for the children of immigrants to achieve a fulfilling career, brighter future and better life through higher education."

As the Chicago Tribune reported, students can use the scholarships at both private and public Illinois colleges. Additionally, the law will also allow families of immigrant students to participate in Illinois' two college tuition savings programs and will require that high school counselors be trained on how to provide college information, including ways to pay for school, to all undocumented students.

"We should be opening, not shutting doors of opportunity for young students regardless of how or why they are living in Illinois," said Senate President Cullerton.

California Governor Jerry Brown recently signed a similar bill while at the Los Angeles City College library. International Business Times noted that both the Illinois and California bills are different from the more controversial federal DREAM Act, which would give some undocumented students a path to citizenship. Still, all three pieces of legislation are based on the belief that undocumented students who have integrated into society and do not have a criminal record should have equal access to government resources when it comes to higher education.

"The Illinois DREAM Act is a crucial step in the right direction, ensuring that worthy students are no longer denied the life-changing opportunity of college simply because their immigration status puts needed financial aid out of reach," said University of Illinois President Michael J. Hogan in the press release.