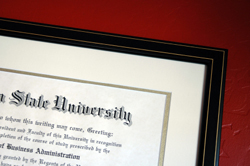 California Community College students will find it easier to transfer to a California State University (CSU) next fall under bills that were signed into law by Gov. Arnold Schwarzenegger on Wednesday.

According to Contra Costa Times, SB 1440 requires California's 112 community colleges to streamline the transfer process and guarantee a CSU seat with junior status to students with an associate degree. Currently, the process is a rough road and students often find out too late that they have not completed some of the required courses or have taken classes that do not transfer. "It's not unusual for a student to come here with three or four years at a community college, only to find they have three years to go," said Susan Opp, associate vice president for academic programs and graduate studies at Cal State East Bay.

Indeed, the San Gabriel Tribune noted that data from the California Legislative Analyst's Office showed that the average community college transfer student took 42 units that were not needed for a bachelor's degree. SF Gate added that while 60 units are needed to transfer, studies have shown that students complete an average of 80 units, many of which are nontransferable.

Many argue that the process is too complicated as transfer requirements change and vary at different CSUs. Senator Alex Padilla (D-Pacoima), author of the bill, told The Los Angeles Times that of those who intend to transfer to a four-year university, only 22.7 percent actually do. Contra Costa Times stated that the problem has been a widespread lack of communication between the school systems. Budget cuts have also made the process more difficult. Heidi Lockhart, Mt. San Antonio College director of career and transfer services, told the San Gabriel Tribune, "The state budget crisis has definitely made things much more complicated because CSU campuses that before were more accessible are now much more competitive so there's much more of an unknown factor."

State officials speculate that the new law will increase efficiency and, thus, save $160 million a year as well as provide access to an additional 40,000 community college students and 14,000 CSU students.

The University of California (UC) system has yet to reach a similar agreement with CSU. According to SF Gate, the second bill that was signed--AB 2302 by Assemblyman Paul Fong (D-Cupertino)--calls for UC to develop a similar transparent transfer pathway. UC is governed by its own Board of Regents, not state law makers.

Susan Wilbur, UC undergraduate admissions director, told Contra Costa Times that they are seriously considering the change, but added that "guarantees are very difficult for the University of California because it's a capacity issue and we can't enroll more students without the funding."

Nonetheless, Sen. Padilla said, "I'm very optimistic that UC will follow suit in the next couple of years."

According to SF Gate, all three California college systems endorsed both bills despite budget cuts that have resulted in crowded campus conditions.