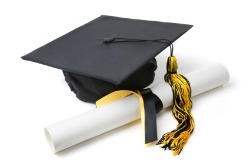 A new report has found that enrollment of new students at graduate schools fell from 2009 to 2010--the first such decline in seven years.

"Both historically and in recent years, there's been an inverse relationship between the economy and graduate student enrollment," noted Debra W. Stewart, the council's president, who was quoted by The New York Times. "But now, they're both down, so the question is, why?"

Stewart attributed the drop in enrollment to the rising cost of graduate school. She also said that because of the recession, "people who have a job are less likely to want to leave it to go back to school, because it's not at all clear that there will be a job for them at the other end."

Other possible reasons for the decline in enrollment were that companies that once paid for employees to attend graduate school have cut back. In addition, public institutions now have fewer stipends to award graduate students.

"The bottom line is," said Stewart, who was quoted by The Chronicle of Higher Education, "it's about money."

Inside Higher Ed reported that according to Nathan Bell, director of research and policy analysis for the council, the drop in new graduate students comes primarily from declines in the fields of education and business: Enrollment in graduate programs in education dropped 8.1 percent, and enrollment in business programs dipped 2.9 percent. That's significant, because over 40 percent of all new graduate students are in those two fields.

Indeed, The New York Times reported that although there was a slight increase in first-time graduate students from 2009 to 2010 at Ohio State University, enrollment in graduate business programs dipped slightly: A total of 256 students began the program in fall 2009, while 240 did so in fall 2010.

"Employers usually pay a lot of that, and with times being tight, that's probably a decline in the percent sent by their companies," noted Patrick S. Osmer, dean of Ohio State's graduate school, who was quoted by the Times.

Another significant finding of the report was that new enrollment in graduate programs fell only among domestic students. By contrast, the number of new international graduate students rose 4.7 percent from 2009 to 2010, at the same time that first-time enrollment of domestic students decreased 1.2 percent.

That particular finding is concerning, Stewart said. "Higher education and, increasingly, graduate education are what drives prosperity," she was quoted as saying by the Times, "and if we get to the point where only people with significant bank accounts can afford graduate education, the country is doomed."