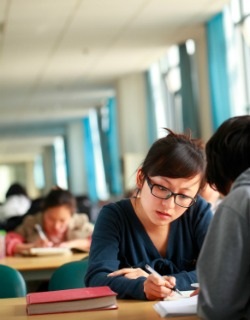 A report by the Council of Graduate Schools shows that American graduate schools accepted more international students in 2011 than they did 2010.

According to Inside Higher Ed, offers of admission to international students went up 11 percent, a significant jump from last year's three percent increase. The Chronicle of Higher Education noted that this is the steepest one-year increase since fall 2006, when international student numbers started to bounce back after a sharp decline following the September 11 attacks. Most of the growth was due to gains in offers of admission to students from China. As The Wall Street Journal reported, admissions offers to Chinese applicants slated to start this fall went up 23 percent. The figure reflects the sixth year in a row of double-digit percentage gains for students from China.

Peggy Blumenthal, senior counselor at the Institute of International Education, said the increase in Chinese admissions reflects the increasing number of middle-class Chinese professionals who can afford U.S. tuition during at time when many American families are struggling in today's economy, leaving American students unable to afford graduate school.

"In China, the economy is booming and both students and their parents have the money and are willing to invest it in education," said Blumenthal.

The Chronicle of Higher Education noted that admissions offers for graduate students from India were also up eight percent after declines in the last three years. India is the second largest source of international students to the U.S.

Growth in admissions offers occurred in all broad fields of study. The largest increases were seen in business (16 percent) and in physical and earth sciences (15 percent). Inside Higher Ed highlighted that gains even occurred in fields that recently experienced declines or just modest increases, such as the humanities and education.

According to The Wall Street Journal, the growth in international student admissions offers for graduate business programs was a significant shift from last year, when business school offers went up just three percent. Many b-schools have increased their international student body in order to meet the needs of corporate recruiters who are increasingly looking for candidates who can work in multinational companies.

Nathan E. Bell, author of the report told The Chronicle of Higher Education that the growth is not likely to continue, especially among Chinese students. He noted that although China cannot currently accommodate the demand for graduate education, eventually the country will have more and better universities, making Chinese students opt to stay home.