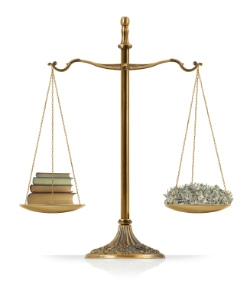 The plaintiffs--four graduates from Cooley and three from New York Law School--argued that the schools' reporting methods misled prospective students by providing distorted post-graduate employment and salary information, reported The Wall Street Journal. Specifically, the lawsuits claimed that the schools advertised an inflated percentage of graduates were employed nine months after graduation by including the number of grads who held jobs that were temporary, part-time and did not require a J.D. or were outside of the legal industry. Furthermore, the lawsuits stated that the schools also reported inaccurate salary information since the data was based on a narrow, self-selected group of graduates rather than all alumni. The plaintiffs seek $250 million from Cooley and $200 million from New York Law School in tuition refunds and other damages. Additionally, they call for more accurate methods of reporting graduate employment and salary data.

"The real numbers would shock people," said David Anziska, a lawyer for Kurzon Strauss, the law firm representing both groups, to The Chronicle of Higher Education. "There are many, many recent graduates out there who have not secured employment and have tens or hundreds of thousands of dollars in bone-crushing and soul-crushing debt that they have no chance of paying off."

The institutions, however, argued that the claims lack merit. Cooley's general counsel Jim Thelen told The Wall Street Journal that the plaintiffs should have contacted the American Bar Association as it is responsible for setting criteria on collecting data, or the Department of Education.

"These are nothing other than attempts to bring public attention to this issue and it certainly doesn't seem like the right way to go about it," said Thelen.

As Inside Higher Ed noted, although the lawsuits target two specific schools, they do indeed reflect a bigger issue within the legal education industry. It raises the question once again of whether the American Bar Association is doing enough to regulate the release of law school statistics and whether there are simply too many law schools for the current job market. However, The Chronicle of Higher Education reported that the two schools were chosen because of their large class sizes--Cooley has the highest enrollment of any law school in the U.S. and the New York school's enrollment has skyrocketed over the past decade.

According to Inside Higher Ed, many student advocates call for more transparency and more granular information so that students can make informed decisions before enrolling in law school or taking out student loans. Some experts, however, question whether that will be enough.

William D. Henderson, a professor of law and director of the Center on the Global Legal Profession at Indiana University acknowledged the longstanding issues with job placement tracking, but also noted that even with better data some graduates would still be disappointed and left with mountains of debt.

"You've got 22- and 23-year-olds who have an image of lawyers made by popular culture," Henderson said to Inside Higher Ed. "They've never bought a house before, and now they can get a loan of over $100,000 to go to law school. This is not a group of people who are going to do rigorous due diligence on the decision to borrow."