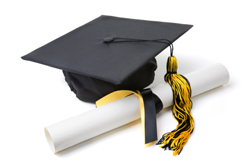 According to a new study by the American Council on Education (ACE), America is not on a healthy path to having the highest college graduation rate by 2020 partly because today's young adults are no better educated than the baby boom generation.

The Wall Street Journal reported that the 24th edition of the study, entitled Minorities in Higher Education, showed that in 2008, 37.5 percent of 25- to 34-year-olds held at least a two-year college degree. Baby boomers (ages 45 to 64) have a similar attainment rate--37 percent. People ages 35 to 44 have an attainment rate of 39 percent.

Furthermore, while more young people are enrolling in post-secondary education, more are not earning degrees. The problem was most apparent in two-year colleges where only 55 percent of students who started in 2005 earned a degree or were still enrolled in 2008. In comparison, ten years ago the number was 60 percent.

The lag in numbers was attributed to specific racial and gender groups, noted The Washington Post. In the past, generations of Americans surpassed the educational attainment of their parents. That trend still remains true, but only for women. As of 2008, 42 percent of 25 to 34 year old women held at least an associate's degree, whereas just 34 percent of women ages 55 to 64 had a two-year degree. For men, 33 percent of younger men held associate degrees versus 40 percent of older men. According to the press release, the gains are primarily attributed to Asian American and white women.

"In general, each generation of younger women in the United States is continuing to reach higher levels of attainment, while that of younger men is falling," said Molly Corbett Broad, ACE president, in The Chronicle of Higher Education.

The report also showed that African Americans and Hispanics continue to have the lowest educational attainment levels. According to The Wall Street Journal, 26 percent of African Americans hold more than a high school diploma and 17.5 percent of Hispanics have at least an associate's degree. Additionally, the press release noted that young Hispanic men lag behind Hispanic women and that gap is only growing wider.

Some of the obstacles Latinos face within education are lack of a high school diploma, language barriers, placement in low-wage, low-skilled jobs that do not provide incentives for continued education and lack of legal status for some.

The report was released just days after President Obama signed an executive order to boost Hispanic academic achievement. ACE's analysis highlighted the importance of understanding the unique challenges Hispanics face and the importance of creating policies that would help raise educational levels. "Our nation stands at the intersection of bold new goals for educational attainment on the one hand, and a pattern of low educational attainment for Hispanic students on the other. For the future of these students and of our nation, we must take this opportunity to act. The costs of leaving behind generations of the fastest growing population in this country are too great," said Broad in the press release.