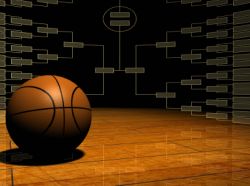 As March Madness gets underway, college basketball fans are focused on the skills of their favorite student athletes. But what is not evident on the court is the academic status of those athletes. According to USA Today, U.S. Secretary of Education Arne Duncan believes schools that are not on track to graduate at least half of their basketball players should not be allowed to participate in the NCAA tournament.

The NCAA has standards in place to track student progress, known as the Academic Progress Rate, or APR. An APR of 925 predicts that roughly half of the student players will graduate. If a team with an APR of less than 925 was banned from the tournament, heavy contenders such as Purdue and Syracuse would be out. According to a report from Bloomberg, the Knight Foundation Commission on Intercollegiate Athletics found that men's basketball teams on track to graduate less than 50 percent of their student athletes received payouts of $179 million for playing in postseason tournaments over the last five years. That is just shy of 44 percent of the total revenue paid to conferences.

In an opinion piece for the Washington Post, Arne Duncan the US Secretary of Education, made several specific points concerning the problem. More than 90 percent of today's intercollegiate teams meet the 925 APR benchmark set by the Knight Commission ten years ago, with men's basketball being the only notable exception. This year, 10 of the 68 teams playing in the post-season tournament are on track to graduate less than half of their players.

Duncan recommends that standards be tightened. He says the current standards mean a team must graduate less than 40 percent of its athletes for six years in a row before the team becomes ineligible for tournament play.

"The math on this is not complicated," Duncan told the USA Today. "If you can't graduate one in two of your student athletes, I just question the institutional commitment to academics. And I think if the NCAA were to draw a line in the sand, you'd see this behavior change very rapidly."

NCAA President Mark Emmert responded with concern and a promise to work with Duncan on the issue. "He and I share the obvious goal of making sure we do everything we can to encourage educational success and growth among our students, whether they be athletes or not--and we'll continue to work on that," Emmert said in a report published by the USA Today.

Syracuse coach Jim Boeheim offers another take on the issue, calling Duncan's recommendations "completely nuts." He points out that the APR of the Syracuse team is currently 912, but new scores posted this spring will bring the APR up to 926. "The APR system gives you an opportunity to get back up to where you belong, like we did," he told USA Today. "What looks to be simple on paper isn't as simple as it looks. If three guys leave and your other seven guys are 'A' students, that still puts you below. It's hard to recover from that."