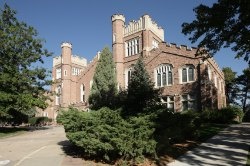 At the University of Colorado's Boulder and Colorado Springs campuses, no one has applied to live in dorms that were specially-designated in August to house legal, gun-owning students, reported The Denver Post. These residential areas were set aside for students at least 21 years of age who have a permit to carry a concealed weapon.

Why no takers? Students may feel they're being segregated unfairly, noted The Christian Post. The school already lets students store firearms upon registration with campus police.

"I'm not surprised," said David Burnett, spokesman for the Students for Concealed Carry organization at CU, to The Denver Post. "You've proven you're legally, responsibly and morally able to carry. Then the college comes back and tells you you've got to move. What would you do?"

CU students seem to have mixed feelings about the gun-designated dorms. Some support allowing students to carry guns whereas others fear accidents involving those weapons. Guns, however, are prohibited at all other student residential and campus areas as well as at ticketed school events, like sports competitions and theater performances. Prior to establishing the gun-friendly dorms, CU had a complete campus ban on firearms. In March, however, the state Supreme Court ruled the school lacked the authority to enact such a policy.

"I believe we have taken responsible steps to adhere to the ruling of the Colorado Supreme Court, while balancing that with the priority of providing a safe environment for our students, faculty and staff," said Chancellor Philip DiStefano in a statement that was quoted by The Christian Post.

However, there is the possibility that students with guns are living secretly in the unapproved residential halls despite policy banning them from having such weapons in their dorm room or on their person, noted The Denver Post. Another possible explanation may be that the total number of students with handgun permits is actually small.

Colorado is not the only state to allow the carrying of concealed weapons. According to the Daily Mail, other states with special provisions sanctioning concealed weapon carrying on public college campuses are Mississippi, Oregon, Utah and Wisconsin. In Utah, for instance, concealed carry of a weapon is permitted at all of its 10 public higher education schools.

On the other hand, 21 states, including California, Florida, Georgia, New York and Texas, currently forbid carrying a concealed weapon on a college campus. In 23 other states, including Alabama, Alaska, Arizona, Connecticut and Virginia, the decision to allow or ban firearms falls on each individual college rather than on the state.

"University sets up special 'gun dorms' where students are allowed to keep weapons… but NO ONE applies to live there," dailymail.co.uk, November 26, 2012