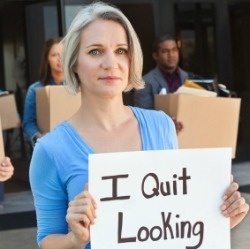 The Labor Department reported on Friday that the U.S. labor force, comprised of the nation's employed plus individuals actively seeking work, decreased by 500,000 people in March, according to The Washington Post. The workforce participation rate is now 63.3 percent, the lowest it has been since May 1979. Even more concerning: the decline is not primarily due to retiring baby boomers, but is instead the result of people ages 25 to 54 abandoning the workforce.

"Prime-aged people are working less, and we don't know why," said Betsey Stevenson, a labor economist and associate professor at the University of Michigan. "I get concerned because there are a lot of people who have useful and productive skills that could really contribute to the economy, and we're just failing to find ways to get them involved."

The Labor Department's findings do not bode well for the individuals who have abandoned the job search, The Wall Street Journal noted. The longer people remain jobless, the harder it is for them to find work. Many stay unemployed due to the gaps on their resume and their lack of updated work experience. Fewer workers in the labor force leads to a smaller population percentage supporting the economy, which then results in stalled or minimal economic growth. Of those who do return to work, many could accept jobs that pay less than what they earned pre-recession.

The decrease in last month's unemployment rate could have been due to the loss of job seekers, and not an increase in the number of Americans obtaining employment, Marketplace suggested. Heidi Shierholz of the Economic Policy Institute told Marketplace that these "missing workers" could number about 4 million. Some left the workforce to have and raise children, planning to return subsequently. Some have opted to go to school instead. Others, however, have dropped out due to frustration at their inability to get a job. Unfortunately, for many, the longer they go without work, the more their confidence in finding employment erodes.

"People who have been out of the workforce for so long often have this crisis of confidence," said Laura Labovich, president of The Career Strategy Group. "They believe it's because of their value that they're not employed."

A 2012 Heritage Foundation study discovered that most of the people who left the labor force between 2007 and 2011 either went to school or went on disability leave, The Washington Post indicated. Researchers said they believed that while students would eventually return to the workforce, individuals who left the labor force on disability would likely not. The weak job market appears largely to blame for this trend, as it is not creating enough positions and therefore not encouraging job seekers to persist in their efforts. Some experts hope faster economic growth and job creation -- which has not happened yet -- could slowly reverse the trend.

"We don't think all of these workers are permanently lost," Michelle Meyer, a senior U.S. economist at Bank of America Merrill Lynch, told the Washington Post. Other economic experts are less optimistic. In a research note they published on Friday, JPMorgan economists stated their concerned stance: "The idea that labor force participation is structurally or institutionally impaired gains increasing credence with each passing jobs report."