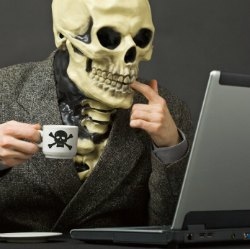 Nearly half of all adults said they plan to dress up for Halloween this year, and some of those may decide to head into the office in costume. According to Life Inc., the National Retail Federation estimates that $8 billion will be spent on everything from candy to decor to costumes in 2012, so don't be surprised if someone comes into work as Snooki from Jersey Shore or Michael Jackson.

Some employees take dressing in costume to the max. This is the case for Dana Pollati and her husband who both work for the same publishing company, according to Life Inc. They usually look for creative costumes that can leave a lasting impression -- such as Lego versions of Jersey Shore characters, for example. Her efforts have led to her being introduced to employees in other departments, which can be advantageous in a building with nearly 1,000 people. She says dressing up has its networking advantages.

"I've met a lot of people that way," she said in Life Inc.

Employees should be careful about what costumes they choose, however. What may seem funny at home, may not be funny when the person arrives at the office and reality, or embarrassment, sets in -- particularly when regular back-up work clothing is not in tow. According to Life Inc., recent costumes that may have been too over-the-top include appearing in the office as a feminine hygiene product or coming in dressed up in the likeness of a bowel movement. These types of costumes can be offensive to others, lead to employees being sent home, or even have a long-term impact on their reputation.

"It's always concerning because we live in a time when every employer has to be thinking about a respectful workplace," Amy Letke, founder and CEO of consulting company Integrity HR, said in Life Inc. "It gets out of hand so fast."

On the other hand, dressing for Halloween can boost team building and even work to one's advantage. Barbara Morris, founder of the company Laser Image, said it gave her the opportunity to see skills in an employee that otherwise may have gone unnoticed, reported The Wall Street Journal. That employee came in dressed as Michael Jackson and gave an impressionable vocal rendition during the company's costume competition.

"When she started, I never thought of her having anything that would work on the sales side," Morris said. "But events like these really show a side to people that you'd never normally see. I offered her a job on the front end of business."

Halloween costumes are just one way in which business executives can help establish team building in their companies. According to The Australian, companies across the globe are looking for new and creative ways to do more of the same. Craig Wallace, director and senior facilitator for the Australian-based consulting firm Team Building, said fun activities can lead to improved communication, resolution of conflicts and increased visibility of personal strengths. They can also help people to relax, which allows others to see a different side of them.

"Often it's just seeing people as people instead of seeing them with their serious work face on," he said in The Australian. "You give them a silly game and they get to see each other laughing and joking and often you realize there's a real person behind the person you see at work."