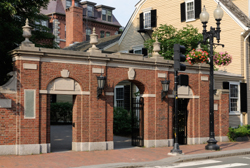 After having eliminated their early admissions options four years ago, Harvard University and Princeton University announced that it would offer a single-choice early application option beginning this fall to students applying for the class of 2016.

According to Inside Higher Ed, both universities as well as the University of Virginia eliminated their early admissions programs in the fall of 2006 in order to even the playing field. Many had criticized the practice, arguing that it favored the wealthy, who did not have to compare financial aid packages from different schools and lacked the resources necessary to submit an application early.

However, because other universities had not followed suit, pointed out The Boston Globe, both schools lost students to universities that continued to offer early admission.

"Having Harvard and Princeton get rid of early admissions and having our principal competitors retain it is the equivalent to unilateral disarmament," said Richard Zeckhauser, a Harvard professor and coauthor of "The Early Admissions Game". "There is too much of a disadvantage of being just one of two or three schools among the elite schools not to offer a program that all the other schools offer." Although Harvard, Princeton and UVA eliminated early admissions, Yale and Stanford continued to have nonbinding early admissions programs. Cornell, Columbia, Dartmouth, Brown and the University of Pennsylvania had early decision programs in which students who applied early were required to attend if admitted.

Princeton President Shirley M. Tilghman told the Office of Communications that the university decided to reinstate the early admission program to provide opportunities for students who know that Princeton is their first choice, as well as to diversify the applicant pool and admit the "strongest possible class".

On a similar note, Harvard Dean of the Faculty of Arts and Sciences Michael D. Smith said, "We looked carefully at trends in Harvard admissions these past years and saw that many highly talented students, including some of the best-prepared low-income and underrepresented minority students, were choosing programs with an early-option, and therefore were missing out on the opportunity to consider Harvard" reported The Harvard Crimson. The Boston Globe added that in addition to reinstating early action, Harvard will also outreach to high schools that historically have not sent many applicants to the institution as well as provide detailed advice on applying to college on its admissions website.

While many still believe that early admissions programs add an unnecessary stress and force students to make a decision too quickly, others noted that some students actually favor early admission, particularly during economic downturn.

"With all the pressure and the uncertainty around college admissions, applying early gives [students] a little control," explained Brad MacGowan, a college counselor.