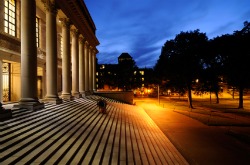 Harvard University is in the process of reshaping its MBA curriculum, but whether it can reform its business school culture remains to be seen.

The business school drew attention when it announced that it would revamp its MBA program, adding new required courses with greater emphasis on ethics and teamwork, The Wall Street Journal reported. The change represents a step away from the school's traditional case-study method of teaching and marks the beginning of a planned overhaul. It also is part of an effort to restore its reputation that was tarnished by the Wall Street shake up.

Some experts say the changes are being implemented to put an end to the elitist, money-hungry culture that dominates business schools, a culture some say has contributed to the recent financial crisis.

"The public lost trust in business, and some of our graduates seem to be responsible for that," said Nitin Nohria, who was appointed dean of the business school in July 2010.

Rakesh Khurana, a management professor at Harvard who has studied business-education practices, says that there is a growing trend of students not caring about classroom learning, spending their time instead on forming connections between themselves.

"It's not clear what the purpose of business education is," he said. "It's got to be more than high-paying jobs and more than a place to build elite social networks."

The changes in curriculum were based on input from alumni, recruiters and current students, according to Bloomberg Businessweek. Brian Kenny, a spokesperson for the business school, said the modifications will take effect next fall.

"I would say it's the beginning," he said. "It's a structured way to think about how we can innovate the curriculum."

According to a statement, the first change will be to create a new required first-year course called FIELD, which stands for Field Immersion Experiences for Leadership Development.

"It will focus on developing substantively meaningful small-group learning experiences that are experiential, immersive, and field-based, with the overall goal of advancing the school's mission to develop leaders who make a difference in the world," the statement read.

The second change will give students and faculty members greater flexibility in shaping the elective curriculum, Poets & Quants noted. The school's two semester format will be divided into four quarters, allowing faculty to create simulations and projects outside of typical 90 minute classes that are a semester long. Though the details are still being finalized, faculty are talking about developing class sessions that would last twice as long in order to give instructors greater leeway in designing innovative course formats.

"We believe both of these enhancements have the potential to become a platform for significant innovation in experiential learning in management education," said Nohria in a statement. "We also believe these changes to the MBA curriculum will give our students an array of exciting field-based opportunities that will serve as a powerful complement to the case method."