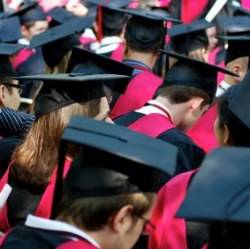 When the latest crop of Harvard Business School graduates attended their commencement ceremony in May, things may have seemed a bit tense between the sexes. The environment was a result of what The New York Times reports was a two-year social experiment in which the School -- noting that fully capable women struggled to succeed both in the classroom and in the business world -- changed curriculum and social rituals to foster female success. Some, including many women, resented the effort, but in the end, it seems a success.

Harvard Business School has long battled a gender equality problem, both among its students and professors. Among the most "shocking," as characterized by Business Insider: Women felt as though they were viewed as objects of amusement rather than intellectual equals, were grossly underrepresented among tenured faculty and, as a result of this environment, censored themselves for fear of being labeled too assertive, thereby reducing their ever-important social capital. Some women were hazed or ridiculed -- often by members of an ultrawealthy, mostly male secret society called Section X. Men also tended to commandeer classroom discussions, which proved problematic since half students' grades were based on participation.

"You weren't supposed to talk about it in open company," Kathleen L. McGinn, a professor who supervised a student study that revealed the grade gap, told The New York Times. "It was a dirty secret that wasn't discussed."

Then, in 2010, Harvard's first female president, Drew Gilpin Faust, appointed a (male) dean named Nitin Nohria who pledged to improve business relations on campus. Female students were coached on how to speak in class -- and even, to some women's chagrin -- how to raise their hands. Nohria installed stenographers in classrooms to reduce professors' potential gender bias when recalling class discussions. Female professors, who were historically rated poorly in teaching quality by their students, were observed and counseled personally by Nohria and his staff.

The changes have received strong support from many individuals, including popular Harvard professor-turned-administrator Frances Frei. "We have to lead the way, and then lead the world in doing it," Frei told the Times, suggesting the school's mission extended far beyond its classroom walls.

Yet the experiment in promoting women's success was not universally popular. Some faculty worried that the shift was actually doing women a disservice because, as one put it, they were not being prepared for the harsh realities of the business world. Others, like Bloomberg columnist Megan McArdle, a University of Chicago MBA and woman, are "skeptical that Harvard really found a way to conquer this problem. According to McArdle, sexist views are often so entrenched in both genders' psyche and actions that counseling sessions and monitoring classroom discussions is not the right approach.

But according to The Guardian, despite its criticisms, the experiment seemed to work. By the time the students graduated, female teaching scores improved dramatically and the number of women placing in the top 5 percent of the class rose from 14 percent in 2009 to 38 percent in 2013. Supporters of the program at HBS suggest, however, that much work remains to be done.

"We made progress on the first-level things, but what it's permitting us to do is see, holy cow, how deep-seated the rest of this is," Frei told The New York Times, noting the deans will continue with their experiment in future classes.