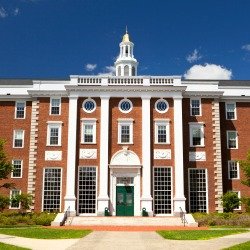 Following months of investigation, the largest Ivy League cheating scandal has left dozens of students on academic probation and even more -- estimates vary between 60 and 70 -- under forced withdrawal. While some within the institution support the disciplinary actions, others suggest the punishment is too severe and that the scandal could instead be a symptom of a broken course system.

The New York Times reports that Harvard University announced its disciplinary response last Friday to one of its largest cheating scandals in recent memory. The investigation began at the start of the academic year, when nearly half of the 279 students enrolled in an "Introduction to Congress" course in government were accused of cheating on their take-home final exam. Suspicions were first raised when teaching fellows grading the exams noticed similarities between multiple students' exams; in some cases, even the same typographical errors were identified, suggesting plagiarism. While the final exam was an open-book and -note exam, collaboration was strictly prohibited.

According to the Boston Herald, Faculty of Arts and Sciences Dean Michael D. Smith wrote in an email that more than half of the implicated students had been asked to withdraw from the institution and can only reapply after they have held "full-time, paid, non-academic jobs in a non-family situation" for at least six months.

The Yale Daily News reports that according to Smith, the case was concluded in December, although no explanation was given as to why the decision was not announced earlier. He noted that the forced withdrawals were retroactive and that those affected would be refunded their first semester's tuition. Many Harvard students not associated with the scandal said they were satisfied with the punishment.

"If they actually cheated, I think it's fair," Harvard senior Dario Sava told the Herald. "I think Harvard is pretty lenient about letting people come back in. There are very few things that will get you kicked out permanently. I don't know if it's a good thing, overall, but I think because it's been their policy, it would be unfair to switch it mid-sentencing."

The New York Times notes that some professors, students and alumni protested that the university was too vague regarding its ethical standards, too tough on the accused students, or too slow in resolving the cases. One implicated student who spoke on the condition of anonymity said that similarities between his paper and others could be traced back to shared lecture notes. A number of students consulted teaching fellows running the class discussion groups when the course suddenly became very difficult, and later explained to Harvard officials that their teaching fellows were very forthcoming with them about how to interpret exam questions. Students contend that they did not realize the no-collaboration rule applied to teaching fellows.

"You want to give them a second chance," senior Roy Zhang told the Boston Herald. "My immediate thought when it happened was if that many people cheated, there's got to be something wrong with the system in that class. But at this point, if the school is asking them to withdraw, I feel like that's a fair punishment."

The New York Times reports that though Harvard has not named the professor involved, implicated students quickly identified him as Assistant Professor Matthew B. Platt. As of Friday, Platt had not yet responded to requests for comment.