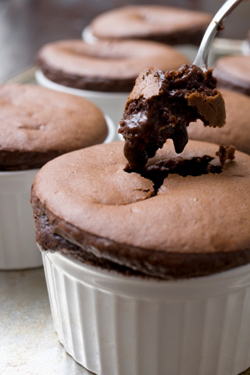 Making molten chocolate cake, ceviche and chewy fruit gelees are just a few of the assignments physics students at Harvard will be doing this semester. According to Zester Daily, Harvard's School of Engineering and Applied Sciences teamed up with Ferran Adria's Fundacion Alicia and the ThinkFoodGroup to create an undergraduate course called "Science and Cooking: From Haute Cuisine to the Science of Soft Matter". The course teaches basic principles in applied physics and engineering through food and cooking.

The New York Times reported that the idea for the class started a couple years ago when Ferran Adria, wizard chef of El Bulli in Spain, visited the campus. At the time, the school wanted to revamp its core undergraduate curriculum and when the idea of a science of cooking class came up, Chef Adria and his foundation did not hesitate to help design coursework that covered the phases of matter, thermodynamics and the chemical reactions that turned ingredients into food.

Boston Business Journal pointed out that the class will examine how heat transfer make a cooked molten cake stay soft on the inside or how citrus juices change the molecular components of fish in ceviche. The New York Times added that through cooking experiments, students will also learn about elasticity and viscosity.

"It is, in the end, a science course, but it's science that you learn with a purpose," explained one of the course's creators physics professor David A. Weitz to The Harvard Crimson. Administrative Director of the Program of General Education Stephanie H. Kenen added that the course "exemplifies the Gen Ed ideals of helping students make connections between the classroom and the rest of their lives."

According to The New York Times, each Thursday Professor Weitz or Michael P. Brenner, a professor of applied mathematics, will cover science concepts. On the following Tuesday, a celebrity chef--such as Wylie Dufresne of WD-50 on the Lower East Side of Manhattan or Grant Achatz of Alinea in Chicago--will talk about cooking techniques to illustrate those science concepts.

"This is such a unique opportunity that I'm hoping students won't mind too much," said Weitz to The Harvard Crimson.

Students definitely did not mind. According to The New York Times, nearly 700 enthusiastic students signed up for the class, many of whom were history and political science majors who have never taken a college science course. Only 300, however, actually got a seat based on a lottery system.

Allan Jean-Baptiste, a junior majoring in economics, said the class has been a great introduction to the two worlds. "I think I will start cooking. I actually think I will take more science classes," he said.

Boston Business Journal reported that, like the hit TV show "Top Chef", students will be given cooking challenges as a final project. Students will work in a contemporary kitchen and a panel of celebrity chefs will judge taste and culinary presentation, while instructors will judge their science.

Harvard hopes the class will be a model for other universities. Amy Rowat, a research associate and co-instructor of the class, said she plans to teach a version of the course at UCLA where she will be an assistant professor in the Department of Integrative Biology and Physiology in January.