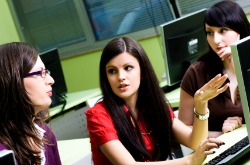 A new report released by Harvard University calls for high schools to boost efforts to improve vocational training programs, suggesting that attending a traditional four-year college may not be the best choice for all students.

The study, "Pathways to Prosperity," states that the current system of education is not adequately preparing students for the real world, said project director William C. Symonds, The Harvard Crimson reported.

"The 'one-size-fits-all' model just doesn't work for everybody," Symonds said. "There's a variety of pathways to success."

Spearheaded by Harvard Graduate School of Education Professor Robert B. Schwartz, the report found that "many young adults lack the skills and work ethic needed for many jobs that pay a middle-class wage" and noted that the teen employment rate is 28.6 percent, the lowest it has been since the Great Depression.

According to the study, only one-third of jobs in the US require a bachelor's degree, while 36 percent do not require a college diploma at all. The report suggests that schools partner with businesses to include more job training in their curricula in order to prepare students for future careers.

"In our view, the U.S. system would be greatly strengthened if the pathways to all major occupations were clearly delineated from the beginning of high school," the report said, as cited by CNN. This would allow students and their parents to map out what courses of study and other experiences would "best position them to gain access to that field."

In particular, the report advocates that future employers help students by offering paid internships and providing greater access to jobs related to students' field of study while they are still in school.

"Our goal should be that beginning no later than middle school, all students should have access to this system of employer involvement and assistance," the report said.

Rather than solely pushing more students to apply to traditional four-year institutions, the authors of the study said educators should encourage students to look for alternative opportunities to advance their education as well, Education Week noted. At an early age, students should receive sound college preparation and rigorous, career-focused learning opportunities with clearly defined paths to certificate or college programs.

"Every high school graduate should find viable ways of pursuing both a career and a meaningful postsecondary degree or credential," the report says. "For too many of our youth, we have treated preparing for college versus preparing for a career as mutually exclusive options."