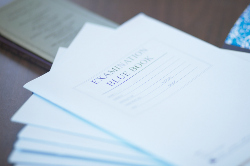 "Finals week" has always been the least favorite time of year for any college student. Luckily, for Harvard students, the school's Faculty of Arts and Sciences (FAS) will no longer routinely require final exams.

The Washington Post reported that starting fall 2010 professors will have to file a request to give a final exam. Harvard Magazine added that instructors will need to inform the Registrar by the end of the first week of the term that they intend to give a formal, seated exam. If an instructor does not to do so, "'the assumption shall be that the instructor will not be giving a three-hour final examination'" and a slot will not be reserved in the schedule. In previous decades, professors who chose not to give a final were required to submit a petition to opt out. However, dean of undergraduate education Jay M. Harris said he never received such a form, even though most professors did not give a final exam.

According to Dean Harris, of the 1,137 undergraduate-level courses this spring, only 259 had scheduled tests. This is the lowest number since 2002, when the university offered 200 fewer courses. For the more than 500 graduate-level courses, 14 had final exams. Additionally, the National Review Online pointed out that general exams, which require seniors to demonstrate mastery of fundamental knowledge within their major, are also given in fewer departments.

Some faculty members have turned to alternative assignments and projects in place of cumulative final exams, arguing that these methods are better gauges of learning. Others do not buy into this idea and are asking, "How are we assessing students?" Moreover, some worry about the consequences this decision may have as Harvard is a "trendsetter" in higher education.

Authors of the National Review Online article claimed that Harvard is lowering standards for the sake of convenience. Diana L. Eck, Wertham professor of law and psychiatry in society, told Harvard Magazine that students are increasingly offended when professors require a final exam and paper.

However, students are not the only ones happy to drop final exams. Instructors have to put in extra effort to create 180 minutes worth of test questions that cover months of material and then grade those tests. On top of that, a new FAS policy required professors to proctor their own exams, which many argue is another disincentive to requiring a final. Because professors tend to be absent from campus in late May, the process of having a final exam seems taxing.

Dean Harris asserted that the college does not think it should do away with final exams and Harvard College dean Evelynn Hammonds acknowledged that the issue has raised important questions about assessment. However, until the Educational Policy Committee begins to figure out a way to address the situation, faculty and students will have one less thing to worry about when school starts this fall.