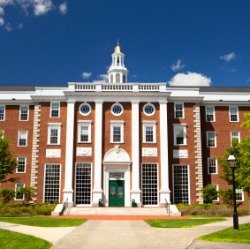 Last year Harvard University found itself in the spotlight when it was revealed that more than a hundred of its students were under investigation for cheating, and dozens were later forced to withdraw. Now, in a bit of déjà vu, the school is at the center of yet another cheating controversy, and this time it has cost the institution four academic championship titles.

Inside Higher Ed reports that Andrew Watkins, a former member of Harvard's champion quiz bowl "A" team, may have accessed tournament questions ahead of time. As a competitor, Watkins wrote questions for middle and high school competitions, which gave him access to National Academic Quiz Tournaments databases. The NAQT announced last week that security logs indicate Watkins inappropriately accessed "questions-by-writer" and/or "category" pages that would have displayed the first 40 characters of questions prepared for four championship tournaments -- matches that Watkin's team would eventually win.

The NAQT said in an announcement that while it has no evidence that Watkins took advantage of his prior access, he still violated an expectation of fair play. The group officially vacated Harvard wins in all affected tournaments and transferred the applicable titles to the runner-up teams.

"Though I know everyone will make their own judgments, I did compete in good faith," said Watkins in a statement included in the NAQT announcement. Watkins concluded the statement by saying, "I apologize to my teammates, to NAQT, and to the community for how my actions sullied three amazing years of competition."

The NAQT announcement noted that Watkins was not the only competitor implicated: Joe Brosch of Wilmington Charter and Scot Putzig of the University of Michigan had also inappropriately accessed questions and had their affected titles revoked. Harvard was the only college to have multiple titles stripped, two of which were transferred to the University of Minnesota, for 2009 and 2011 championship tournaments.

"It still doesn't really make sense to me. It's awesome," Andrew Hart, who competed on both University of Minnesota teams, told the Minneapolis Star Tribune. "We did it. We actually did it." Regarding Watkin's security breech, Hart said it was akin to having the answer key to a test. "It's not gaining an advantage," he said. "It's actually knowing the answers."

Hart's teammate, Mike Cheyne, told the Star Tribune that while at first he felt satisfied with the NAQT's response, he later felt anger that the team was not given the opportunity to be recognized at the time of the competition. "The title lasts forever," Cheyne said, "but you missed out on everything associated with it."

Other newly minted teams also met the news with some trepidation, including Marshall Steinbaum, who competed on the University of Chicago's quiz bowl team that assumed the 2010 Division I championship title following Harvard's removal.

"The thing to ask is why NAQT is so vulnerable to being cheated," Steinbaum told Inside Higher Ed. "That's the story, I think, beyond Harvard's conduct in particular," said Steinbaum.

In its announcement, the NAQT said it was sorry that its website "could be exploited to allow unauthorized access" to championship quiz bowl information, noting that it had already closed the security loopholes.