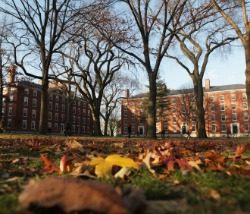 On Monday morning, officials at Harvard University evacuated four buildings after receiving anonymous emails regarding a bomb threat. It turns out that the threats were a hoax by a student who wanted to get out of taking a final exam.

NBC News reported that 20-year-old Eldo Kim was arrested on Tuesday on federal bomb hoax charges. Under the charge, Kim could face up to five years in prison, three years of supervised release and a $250,000 fine. Kim appeared in court on Wednesday morning for a preliminary hearing.

According to The Harvard Crimson, an affidavit stated that Kim admitted to authorities that he conducted the hoax in an effort to avoid taking a final exam on Monday morning. Around 8:30 a.m., Kim had sent anonymous emails to Harvard administrators, university police and the student newspaper claiming that bombs had been placed in two of four campus buildings. In the emails, Kim wrote, "be quick for they will go off soon." It was noted that Kim had also sent an email to his dormitory listserv on Saturday night seeking help for the class GOV 1368: The Politics of American Education. Though it was not confirmed, authorities suspected that Kim was scheduled to take that exam in one of the buildings mentioned in the email at 9 a.m. on Monday.

Although unsuccessful, Kim had tried to cover up his tracks. The Harvard Crimson reported that he had sent the emails using a free online application that creates temporary anonymous email addresses. He also used a free application called TOR, which generates temporary, random, anonymous IP addresses that are difficult to trace. Authorities were able to track him down, however, because he had gone through the Harvard wireless network in order to access TOR. This discovery led to Kim's questioning on Monday evening -- and eventual arrest -- at Quincy Hall, Kim's dormitory.

The Boston Globe noted that the university and federal law enforcement responded promptly by evacuating the four buildings mentioned in the threat, which forced the cancellation of several final exams throughout the day, due to jitters after the Boston Marathon attack as well as an enormous amount of media attention. After thorough examination of the four buildings, no explosives were found and the evacuated buildings were cleared that afternoon.

While some students were rattled, The Harvard Crimson reported that many were not surprised that the threats were a hoax by a Harvard student since the university has a highly stressful environment. Some students seemed simply annoyed by the disruption. Mathilde Montpetit, who was one of the editors in chief for the Harvard International Review where Kim briefly worked at during his freshman year, told The Boston Globe that the hoax was a waste of time and taxpayer resources.

"I don't know if he deserves five years in prison, but it was definitely stupid," Montpetit said to The Boston Globe.

According to The Harvard Crimson, a university spokesperson issued a statement saying, "We are aware that a member of our community has been arrested in relation to this matter and are saddened by the details alleged in the criminal complaint filed by the United States Attorney's office today."

The university did not comment further on the ongoing investigation.