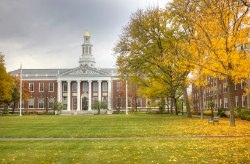 More than 100 Harvard undergraduate students are under investigation for allegedly cheating on a take-home final exam in the spring.

For privacy reasons, the school will not release students' names or the course title, according to The Boston Globe. However, The Harvard Crimson identified the class as "Government 1310: Introduction to Congress," taught by Matthew Platt, an assistant professor. School officials did confirm that about half of the 250-plus exams were problematic.

Students in the government class were not allowed to collaborate on the exam, which was comprised of short-answer questions and an essay, The Huffington Post reported. Yet, several of the completed tests exhibited similarities in answers, even some identical parts, which suggested either collaboration or plagiarism among the students.

"These allegations, if proven, represent totally unacceptable behavior that betrays the trust upon which intellectual inquiry at Harvard depends," Harvard University President Drew Faust said in a written announcement quoted by USA Today. "We must deal with this fairly and through a deliberative process."

Each of the students with a suspect final exam has been contacted and, over the next few weeks, will appear individually before a subcommittee of the Harvard College Administrative Board, which is charged with handling academic behavior, The Wall Street Journal noted. Discipline for students found guilty could include forced withdrawal from Harvard for a year. The course included undergraduates of all class levels and Jay Harris, Harvard's dean of undergraduate education, would not say whether students who already graduated would get their diplomas withdrawn, noted The Boston Globe.

Harvard personnel, over the past two years, have suspected an increased incidence of plagiarism, which the school is trying to tackle. For example, in 2010, it formed an academic integrity committee. Last year, it initiated a freshman pledge in which students agreed to behave with integrity and respect. Many in academia, however, considered the pledge unscholarly, and this year, Harvard did away with it.

School officials said they plan to use the situation to remind and better educate students about academic integrity, as students hold "clearly shifting attitudes toward the whole idea of intellectual property and what's involved in moving bits and pixels around," said Harris.

Harvard will also consider implementing preventive measures, including an academic honor code, which administrators and faculty in the past have eschewed, arguing students should already know how to behave properly.

"We take academic integrity very seriously because it goes to the heart of our educational mission," Michael D. Smith, dean of the faculty of arts and sciences told The Wall Street Journal. "Academic dishonesty cannot and will not be tolerated at Harvard."