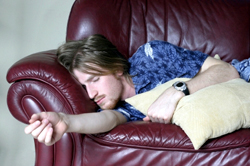 Couchsurfing is a popular phenomenon, particularly among young travelers. Some, however, question how safe it is. Harvard University officials seem to think the risks outweigh the benefits and announced that the school would no longer allow upperclassmen to host couchsurfing guests.

According to The Tufts Daily, couchsurfing gained worldwide popularity in 2003 when couchsurfing.org was launched. The site acts as a network, connecting travelers with locals in countries all over the world. Hosts allow "surfers", or travelers, to stay with them as guests in their homes.

The Boston Herald reported that the site has some 2.4 million users, about 800,000 of which are students.

"I was dismayed to hear that Harvard is considering turning down this opportunity to embrace such a wonderful social innovation that is clearly appreciated and loved by its students," said co-founder and board chairman Daniel Hoffer, who is also a Harvard grad. He added that Harvard is the only university in the world to ban hosting.

Harvard spokesman Jeff Neal said in an e-mail to the Boston Herald that students may have overnight guests as long as the guests "are well known by the students with whom they stay... In the case of this service, these conditions are unlikely to be met, and meeting and hosting guests in this way could compromise the safety of House residents".

Indeed, WBZ-TV pointed out that there are some risks--last year a female couchsurfer reported that she had been raped by her host in England. The Harvard Crimson also noted that the website's message board has many individual accounts of alleged assault.

Many, however, argued that those were isolated incidents and that overall couchsurfing is a unique and rewarding experience for both host and surfer.

"I [couch]surfed when I needed a place to stay in Australia," said Rebecca H. Kwan, a student at Harvard who has also hosted an international guest in her dorm room. "I think it's a really good experience. The people you meet when hosting are amazing and their experiences are so incredible."

"One of the guys took me and my friend out to dinner, and he just showed us a lot of the local things around town," she said. "He offered to take us to the supermarket and introduced us to all these delicacies and drinks that we otherwise wouldn't have tried because we just didn't know what they were."

George Kolev, a senior at Tufts University who has hosted and surfed, said the greatest benefit of couchsurfing is the community and connections it creates. Furthermore, he added, "[As a host] it forces you to pay attention to things in your own town... it opens you up to things in your own country."