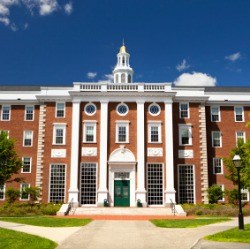 Many parents dream that their children will one day attend Harvard University. Research firm Wealth-X has just given parents—and students—one more reason to covet the already prestigious institution.

According to Wealth-X, Harvard University has the highest number of living alumni worth at least $30 million, reported ABC News. Wealth-X calls people who fall into this category, “ultra-high-net-worth” individuals. As No. 1 on the list, Harvard has produced 2,964 ultra-high-net-worth graduates, with a collective worth of $622 billion. The university has also graduated the highest number of billionaires—52, with a total fortune of $205 billion, reported NBC News.

So what makes Harvard the expert in graduating wealthy alumni? David Friedman, president of Wealth-X told NBC News that it’s all about networking.

“It shows the power of networks,” Friedman said. “Harvard has this entrenched, powerful network that extends across so many sectors and is incredibly pro-active about connecting its alumni. You get a great education, but you also get access.”

According to Private Wealth, of the top 20 universities in the world that also made the list, just three were not in the U.S. Coming in after Harvard was the University of Pennsylvania, followed by Stanford University. Columbia University and New York University rounded out the top 5 schools with the most ultra-high-net-worth alumni.

“American universities dominate the rankings largely because these prestigious institutions have been able to attract global talent,” said Friedman as quoted by Private Wealth. “Most of the ultra-high-net-worth alumni have self-made fortunes, underscoring how these institutions have served as launching pads for many of the world’s most successful entrepreneurs and companies.”

Wealth-X also looked at gender representation among these wealthy graduates. As reported by NBC News, Monash University in Melbourne, Australia had the highest percentage of ultra-high-net-worth female alumni—17 percent. In the U.S., Northwestern and Brown had the wealthiest female alumni, with 15 percent and 14 percent, respectively. For men, Private Wealth noted that the Massachusetts Institute of Technology, which was No. 7 on the overall list, had the highest percentage of rich male graduates, at 98 percent.

However, for those of us who did not attend an elite university, Friedman offered consolation in NBC News: the institutions that compromised Wealth-X’s list only produced a total of 14,355 ultra-high-net-worth individuals, or roughly 7 percent of the total global population.

“That leaves 93 percent of the world’s super-rich who did just fine without attending a top ranked school,” said Friedman in NBC News.