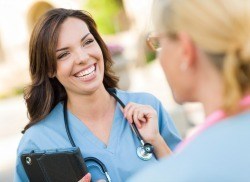 Some people invariably go into the health care industry to make a difference in the lives of others, but recent analyses suggest there are other, less sentimental advantages of entering the field, including the fact that health care jobs rank among some of the highest-paying and most in-demand in the nation. Thanks to shifts in the market, leveraged by recent health care reform, this demand is unlikely to wane any time soon.

When Reddit user Dan Lin published what Vox called a "very long," color-coded ranking of the highest paying jobs in the country, the thick bands of fuchsia clustered near the top made one point abundantly clear: Health care jobs tend to pay well. In fact, using 2013 wage data from the U.S. Bureau of Labor Statistics, Lin found that health care occupations accounted for 13 of the 15 highest paying careers in the country; only one non-health-care occupation -- chief executives -- cracked the top ten. Anesthesiologists, who earned a mean wage of about $235,000 that year, took the number one spot on the wage ladder, followed closely by surgeons, obstetricians and gynecologists, and orthodontists.

Lin's analysis is not the only one that boded well for health care professionals recently. As The Motley Fool reported earlier this month, a survey from the job ratings and salary site Glassdoor also found that health care workers are in demand. The overall share of health care jobs is expected to grow from 17 million to 22 million by 2020, reported the Fool, and the industry is expected to become the largest segment of the U.S. economy within just six years, surpassing the business and professional services sector.

A number of factors may contribute to the health care sector's quick growth, including the Affordable Care Act, popularly referred to as Obamacare. According to The Wall Street Journal, new regulatory and data reporting requirements are antiquating a range of health care applications designed to automate many processes, such as reviewing and processing reimbursement claims. Many companies have found updating these programs expensive, and it may actually be more cost-effective to invest in hiring new workers.

Yet despite all of this good news, many health care workers remain dissatisfied with their work. According to the Glassdoor results published by The Motley Fool, health care employers are struggling to fill many positions, not just because there is a shortage of workers, but because those already in the industry are looking for new jobs. Their number one complaint: inadequate compensation and benefits, though limited advancement potential and rocky relationships with their managers also ranked highly on their lists. Morale was another key factor: 66 percent of survey respondents said they would likely accept a job with less money in exchange for a better workplace culture, and 56 percent said they would make the leap if the recruiting company valued helping people above all else.

"Healthcare Jobs Are in Demand: How Companies Can Win the Competition for Talent," fool.com, June 4, 2014, Casey Kelly-Barton, http://www.fool.com/investing/general/2014/06/04/healthcare-jobs-are-in-demand-how-companies-can-wi.aspx