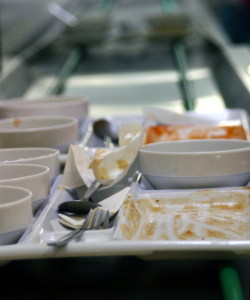 College students have always hated eating at their campus cafeteria. From the mystery meat to questionable sauces, most students opt to play it safe with a bowl of cereal or just don't bother eating there at all. In New York City, however, some college cafeterias have taken it to another level. According to The New York Times, new grade requirements for cleanliness have given students something else to complain about.

After introducing a rating system last summer for restaurants and college cafeterias, health inspectors have called out Fordham University, New York University and Pace University for numerous health violations. Kitchens can receive A's, B's or C's. Anything over 27 violations warrants a C, the lowest grade.

Fordham, for example, received a C after evidence of mice was found at all three of its food outlets on its Bronx campus. Live roaches and unsanitized surfaces were also issues at Fordham's Student Deli. Although two of the cafeterias have since been reinspected and received A's, some students aren't convinced. Michelle FlorCruz, a junior, reported finding a large dead grasshopper in her salad last fall and still hasn't gotten over her disgust.

Pace University's main cafeteria was inspected on March 24 and was shut down by the city after an astonishing 79 violations were found. Inspectors found soiled wiping cloths, inadequate hand-washing facilities and food kept at unsafe temperatures.

"I used to go there to eat but I stopped," said freshman Daoud Nsangou. "I'm quite scared because I'm worried the food might make me sick."

Indeed, many students--and parents--share the same concern. One Pace University parent told PIX 11 News that she spends more than $1,400 a semester on a meal plan so that her son can eat at the cafeteria.

"This is so disturbing," she said.

Although Pace's cafeteria has reopened, students have demanded a new food provider and the ability to use meal cards off campus at neighborhood restaurants and cafes, reported The New York Times. Because some students are locked in to a meal plan, students say they should have better options and more alternatives. Pace officials have been surprisingly cooperative with students' demands, allowing students to help choose a new food provider and seeking operators who can install card readers at local establishments.

Still, some students worry that this is just a temporary response.

"They butter you up with nice things and free samples, but it might go right back to the way it was," said David Dushaj.

And for some students, there is no turning back anymore.

"I still wouldn't eat the food," said senior Kelly Johnston. "It's all the same people working there, but they have hats now."