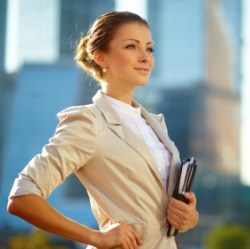 Women's career achievements -- or challenges -- -have been a popular topic in the news as of late. Last year a survey found that for the first time ever, a larger share of the nation's family breadwinners were women, yet they still tend to earn less than men, and remain grossly underrepresented in certain fields. This weekend The New York Times published a piece exploring how some women have managed to beat the odds and succeed on Wall Street, a decidedly male dominated field. Their secret: Stay-at-home husbands.

In an economy in which many highly educated women are choosing to opt-out of the workforce to care for their children, some women in finance are defying the trend and investing more in their careers. In order to succeed, however, they increasingly rely on stay-at-home husbands who can manage domestic duties. Men take care of the kids and do the shopping while women get up at 4:30 in the morning and spend long, grueling hours in a hypercompetitive workplace..

"We're almost like an opposite '50s couple," one such husband, called Mr. Skinner, told The New York Times.. "I'm staying at home, I do the dishes, I do the laundry, I do everything the housewife does. I'm just a dude."

While Wall Street women with stay-at-home husbands represent just two percent of all women in finance, census data indicates their numbers have grown tenfold since 1980. Part of the reason, suggests The New York Times, is because in this particular industry, alternatives are few and far between. Many interviewees profiled in the feature said that even with babysitting and household help, finance is too demanding for most two-career marriages. In other words, the women who do tend to succeed do so because they give in to what the authors called the industry's "brutal" terms -- not because the workplace was evolving or employers are more accommodating to working parents. They said the circumstances might leave one wondering whether this growing sect is indicative of any progress at all.

Slate Magazine's The XX Factor published a response to the article that put it squarely in the "not progress" camp. Studies suggest that 93 percent of women who leave their careers to raise children want to return to the job market, but only 40 percent of those women are able to find full-time work, suggests Slate. The dads featured in The New York Times article are likely in the same boat.

"(It) somehow doesn't feel like progress when women can only succeed at the highest levels because they've got a stay-at-home spouse," wrote Slate columnist Jessica Grose. "It just feels like the same old story with a gender twist."

USC Marshall School professor and author Kathleen Reardon wrote her own response to The New York Times piece, which she suggests only really highlights "one avenue women may take to get ahead," but one that is "nearly impossible to find."

"The NYT article is about wealthy women of Wall Street and so it was not intended to be representative of the majority of women working in corporate America," Reardon wrote in her column on The Huffington Post. She said women need real "solutions that can actually be applied if they are to advance" in male-dominated organizations. Nonetheless, suggests Reardon, such features are "important to the goal" of figuring out why women lag behind men in so many fields.

"Are We Asking the Right Questions About Women's Advancement at Work?" huffingtonpost.com, December 9, 2013, Kathleen Reardon, http://www.huffingtonpost.com/kathleen-reardon/are-we-asking-the-right-q_b_4414163.html

"Women Can Rise on Wall Street If Husbands Stay Home. This Is Not Progress." slate.com, December 9, 2013, Jessica Grose, http://www.slate.com/blogs/xx_factor/2013/12/09/new_york_times_features_wall_street_mothers_with_husbands_who_stay_home.html