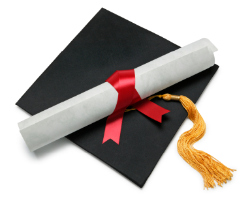 After years of low graduation rates, a new report showed that the nation is finally beginning to see some improvements.

The report, Building a Grad Nation: Progress and Challenge in Ending the High School Dropout Epidemic, by America's Promise Alliance, Civic Enterprises and the Everyone Graduates Center at John Hopkins University, showed that graduation rates among U.S. high school students increased to 75 percent in 2008 from 72 percent in 2002. A total of 29 states increased their statewide graduation rate from 2002 to 2008.

Furthermore, the report also revealed that "dropout factory" high schools, or schools with graduation rates at or below 50 percent, declined by 13 percent. In 2002, there were 2,007 dropout factories, compared to 1,746 in 2008. As eSchool News reported, dropout factories make up just 10 percent of all U.S. schools, but account for half of all dropouts.

Marguerite W. Kondracke, president of America's Promise Alliance, was optimistic about the data. She told The New York Times, "I like this report because it shows that progress is possible against all odds."

According to eSchool News, the report stated that improvements were due to higher standards, better data use and more parent engagement, among other strategies. This is the first significant improvement American high schools have seen in 40 years.

While all good news, some argued that it is not good enough. Daniel Losen, a former Harvard lecturer who does research on graduation issues, told The New York Times that the report "might be a bit on the rosy side". He added, "We might be beginning to turn a corner, but we're not coming out of it yet."

Indeed, the report noted that African American, Native American and Hispanic students still have a disproportionately low graduation rate compared to Asian and white students. eSchool News reported that if the nation cut dropout rates for minority students in major cities by half, one high school class alone could create more than 17,000 jobs, save $2.3 billion in an average year and increase tax revenue by $249.7 million for the nation.

The report included a Civic Marshall Plan, which identified strategies and benchmarks for continued improvement and also cited Alabama, New York City, Tennessee and Richmond, Indiana as model case studies. According to The New York Times, researchers at Johns Hopkins University called Richmond High School in Indiana a dropout factory in 2005. Between 2006 and 2009, however, teachers, community leaders and professors helped turn things around and raised the graduation rate from 53 percent to 80 percent.

eSchool News reported that if the benchmarks discussed in the Civic Marshall Plan are met, in 2020 some 600,000 more students will graduate than those who graduated in the class of 2008.

"Federal aid to high schools is up; so are graduation rates," washingtonpost.com, November 30, 2010, Nick Anderson