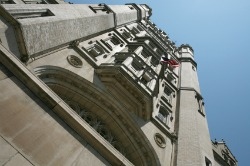 On Tuesday, New York City Mayor Michael Bloomberg announced the four-year high school graduation rate in the city reached a new record of 65 percent. Yet, his news was tempered by data from the New York State Department of Education, which found only a small percentage of those students are actually prepared for college. "High-school graduation should mean more than high-school completion," Board of Regents Chancellor Merryl Tisch told The Wall Street Journal.

Statewide, 73.4 percent of students who began ninth grade in 2006 graduated in four years, reports Syracuse.com. This is a slight increase over 2009's graduation rate of 71.8 percent. However, New York's "college-ready" rate (the first) for the same group of students was a meager 36.7 percent.

According to The Wall Street Journal, the Education Department defines college readiness as earning a passing scores on the Regents English and math exams, a score of 80 or higher on the state math exam and 75 or higher on the English exam. The Education Department created the college-ready rate because students as recently as last year could graduate from high school with a minimal "local" diploma by passing three Regents exams with a score of 65 and two others with a score of 55. The "local" diploma--the state Board of Regents argues--insufficiently prepares students for college, Syracuse.com notes.

Tom Dunn, the Education Department spokesmen, revealed to Syracuse.com that the Regents are discussing how graduation requirements could be tightened by raising passing scores on exams. In fact, the Times Union found that the Education Department has implemented a more challenging core curriculum and new assessments for teachers. The data presented by the Education Department also reveals a stark achievement gap between racial groups. A review of the data by The New York Times discovered that statewide, only 13 percent of African-American students and 15 percent of Hispanic students could be considered "college-ready." Those numbers stand in contrast to the 56 percent of Asian-Americans and 51 percent of Caucasian students who graduated as college-ready individuals.

While Mayor Bloomberg touted graduation rates in New York City, graduation rates in many area districts either remained static or only saw a slight increase. In addition, some districts experienced a significant drop-off against 2009 numbers. For example, the graduation rate in Albany decreased from 53 percent to 47 percent. Ray Colucciello, Albany superintendent, told the Times Union the district initiated Saturday academic assistance sessions, launched a summer program for eight graders and plans to restructure its high school.

"New York has some of the highest performing schools and districts in the country, but today's data makes clear that we have tremendous work to do to reduce the drop-out rate, close a stubbornly persistent racial achievement gap and ensure that more of our graduates are prepared for college and the workforce," Tisch said in a statement, per the Times Union.

Tisch defends the college-ready data, calling it "useful truths." "We are all aware that this is very challenging, and that the tenacity of the achievement gap is undeniable," she said. "But the only way to correct the problem is to find something that allows you to state clearly where you are, and that's what this is" as reported by the New York Times.