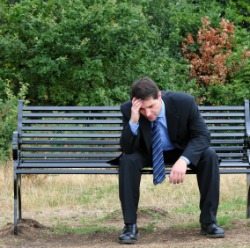 Scientists have found that workers with limited education are more prone to depression and other mental illnesses, reports LiveScience. Does that mean highly educated workers are less likely to be depressed? Not necessarily. According to a new study, being too educated could increase the risk of mental illness, especially in difficult economies or in jobs with little room for advancement.

The new study defines individuals as "overeducated" if they have completed more years of school than needed for their job. This group has an increased risk of certain mental health problems, according to results discussed in LiveScience. Researchers measured depression levels and tracked educational attainment for more than 16,600 employed people between the ages of 25 and 60, in 21 countries. Participants whose education levels exceeded those required for their jobs were found to be more prone to mental health problems.

Part of the cause for this trend could be that these individuals are not challenged in the workplace and are unable to use many of the skills they mastered in school, Piet Bracke, a sociology professor at Ghent University in Belgium and member of the research team, told LiveScience. He said these workers also tend to have positions with less status and prestige, and they may have unbalanced support networks, meaning they look to others for more support than these individuals can give.

The sluggish economy may be another factor behind depression rates in workers who are overeducated for their jobs. According to The University Herald, it has become more difficult for college graduates to find work in their fields, especially positions that have the potential for upward movement within the next few years. As a result, workers may feel stuck in positions for which they are over-qualified.

"At the country level, if the number of people with university education continues to rise, [and] if there isn't an equivalent upgrading of the labor market, it will deteriorate the mental health of the population," Bracke said, as reported by The University Herald.

Whatever its cause, the new study suggests that the link between under-utilized education and mental illness might have a community effect: Bracke told LiveScience, "If the economic returns of education decrease, it affects the mental health of all the well-educated." This could especially be seen in nations where more education does not correlate with significantly better earnings or job security.

The new study is not the first to explore the link between education and mental health. LiveScience reports that previous research found that people with limited education have approximately double the risk of severe or frequent symptoms of depression compared to those with more education. Researchers have also suggested a link between higher intelligence levels and an increased risk of mental health, reports Psych Central. Some experts speculate that this is a by-product of evolution: as human mental capacity increased, so did susceptibility to brain disorders.

"The price of higher intelligence and more complex behaviors is more mental illness," said Professor Seth Grant of the University of Edinburgh, according to a blog on Psych Central.

The new study was presented at an American Sociological Association meeting Saturday, August 10.